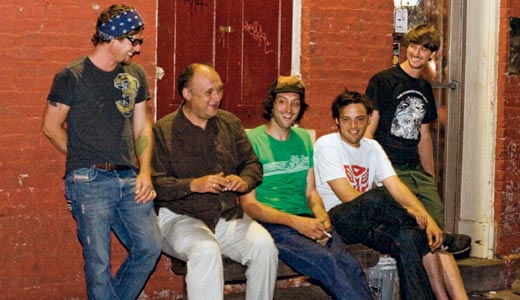 Local dub-based experimental band The Children are playing a rooftop show at Glassworks on Friday. This is a good opportunity to catch up with them for at least two reasons.

First, the entire evening is planned as a celebration of dub, including the screening of a documentary that shows how this style spun off of early reggae and then began its influence on hip-hop and electronic that continues to this day.

Second, The Children were considered history in some corners. But bassist Gary “Basil” Bromley isn’t seeing this as an against-the-odds reunion. When he spoke with LEO, he just seemed glad that the complete band lineup could still be called upon — for now, with the capacity for future gigs, and quite possibly in the studio as well.

Bromley has the sort of pedigree that most American bands would like in a spokesperson. Right off the top, he retains most of the slow-and-heavy Brit accent that marks his roots as a laid-back Londoner. Before he moved here in the early ’90s, he’d witnessed a lot of the history that informs his favorite musical styles (e.g., touring with The Cocteau Twins). And perhaps best of all, his best-known group Dif Juz was way ahead of its time — anticipating much of post-rock before the 1980s were halfway done.

Fortunately for us, Bromley made a home here (“Louisville is like a mix between London and New York in terms of pace”) but stayed musically restless. Besides contributing to multiple ensembles (“I did play with a more traditional reggae band, which wasn’t really ‘affected’ as much as The Children”), he’s DJ’d for clubs and on the radio.

Dub aficionados typically have a special place in their heart for the turntable — whether they ever show up on vinyl themselves. Bromley traces it back to early reggae 7-inch singles, when vocals would only be on the “A” side of the record. “You’d play the vocal side and then flip it over to the dub. Also, you’d have a DJ on the mic in between — like an MC.”

With the right DJ and club ambience, the dub side of the record could be made to give the audience the feeling they were being brought deeper inside the song.

A lot of dub’s magic comes from how mixers tweak the “riddim” with extra emphasis on bass and echo. But in a live act like The Children, manipulations of the heavy, airy sound can head off into brazen experimentation. The jagged, slithering noises at the end of “Blue Boot Journals,” for instance, leave an indelible impression as they yank away a hypnotic inertia that had been built carefully and masterfully.

Bromley’s been happy with Louisville’s reception to his musical ventures. But for The Children in particular, he notes the warmth and openness that reached out to “that indie part of us.” He seems ready to meet that with a more regular resumption of band activities, but his big condition is “getting us all together. I won’t be anything without everyone else. Teamwork is the key.”