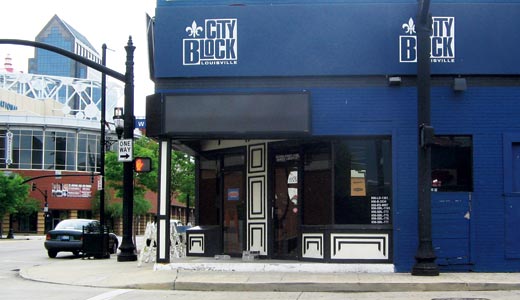 The story of the demise of City Block — one of downtown Louisville’s pioneering nightlife venues that closed late last month — is a story partly about, ironically, downtown’s economic revitalization.

“In 1990, there simply was no market in downtown Louisville for entertainment, and we practically created that,” says Ward Plauche, former co-owner of the shuttered property at Second and Jefferson streets. “There was no high-rise Marriott. No convention center. Just a bunch of surface lots, and us.”

Over the years, Plauche and his business partner, Don Blackburn, saw those surface lots fill one by one. In a process spearheaded by then-Louisville Mayor David Armstrong and continued aggressively by his post-merger successor, Jerry Abramson, downtown Louisville began a transformation from sleepy, 9-to-5 workplace into the increasingly dynamic urban core of today.

When the city initiated its long-running business affair with the Baltimore-based developer the Cordish Cos., the idea was to renovate the Galleria mall into the open-air, corporate megalith we know as Fourth Street Live. Practically overnight, an area better known for its wig shops and ambling derelicts became the city’s newest entertainment district, virtually creating a neon oasis in the middle of Louisville’s latent urban decay.

Yet the transformation has come at a price, both in taxpayer dollars and economic cannibalization. Many in the local business and development community — Plauche especially — believe the use of TIF (tax increment financing) money and mayoral political muscle have engendered an off-kilter playing field where the average entrepreneur is outnumbered, outgunned and out-funded.

“Two years ago, my partner and I started having meetings with the mayor and [Metro Economic Development Director] Bruce Traughber to voice our concerns about the sustainability of Fourth Street Live,” Plauche says. “Our concern was that since the city had created these businesses with Cordish using taxpayer money, the downtown market would be diluted.”

In the two years since, Plauche and Blackburn met with the mayor and other city officials to attempt garnering some of the love showered onto Cordish — the least of which regarded procurement of additional parking in downtown’s rapidly changing landscape — but were ignored every time.

Just last month, as Plauche was informing his City Block employees that they were all going to be without jobs, he received an e-mail from Traughber offering a $200,000 forgivable loan and TIF district designation for his beleaguered nightclub operation. It was an offer Plauche believes Traughber was in no position to make, calling it a “cover your ass” move.

“It would have been inappropriate of me to have made that offer if the city council was still debating that very issue,” says Traughber, referring to a new ordinance that requires Metro Council to approve any economic development loan in excess of $150,000.

However, once the council committee approved it, “I went ahead and made them the offer,” Traughber says. So everything was done by the book, more or less.

Whether such an offer would’ve made any difference is, by now, largely a moot point; Plauche is focusing on future plans despite the fact that his comments might portray him as bitter. But even if he, his partner and City Block itself have become poster children for the creeping power of Fourth Street Live and its sister/expansion project — dubbed Center City — he is far from alone in his sentiments.

Under the condition of anonymity, a prominent local developer gave me a tour of Fourth Street Live, specifically Cordish’s latest undertaking, the $950,000 refurbishing of Lucky Strike Lanes into something hipper called The Sports and Social Club. He showed me Cordish’s design proposal for the property’s exterior, which included fancy accoutrements like wainscoting and a glass-centric façade that, according to the proposal’s estimate, would’ve fetched $20,000.

He pointed out two major inconsistencies between Cordish’s proposal and the finished result: Namely, (1) the aforementioned wainscoting had been rendered as stained plywood, a cheap material that also (2) usurped the façade’s design as well; where there should be a massive glass window and a door, there is only a massive box of plywood. And that’s just the outside. “I’ve been in this business a long time, and I know cheap plywood when I see it.”

He also pointed out that, prior to the fruition of Center City’s land acquisition, Cordish had optioned the former JC Penny building (valued at roughly $2 million) on South Fourth Street for $75,000 and, simply, held it. “By the time the Center City deal was brokered, there was a provision in the deal that essentially refunded Cordish that same $75,000 for essentially doing nothing,” he says. “Plus, they walked out with half a million in cash.”

Standing beneath Fourth Street Live’s trademark “roof” — just three blocks west of the barren City Block — the developer sizes up the contentious district by saying, “It’s one of the biggest lootings I’ve ever seen … Do you remember when Fourth Street Live first opened, and how the city was originally supposed to get a percentage of those profits? Now Cordish claims they aren’t making any profits, which doesn’t make a lot of sense.”

He cites their debt-free, tax-funded nature as reason enough to turn a profit, as Cordish’s financial burdens are tied up solely in associated operating costs and, in the case of Fourth Street Live, minimal physical investment.

Like most things development-related in downtown Louisville, the ins, outs, and what-have-yous are decided behind closed doors. The resulting lack of information creates a vacuum wherein all sorts of rumor, ill-will and backstabbing are as commonplace as Derby, bourbon and Slugger baseball bats.

Asks Plauche, rhetorically, “How does a local guy offset that advantage?”