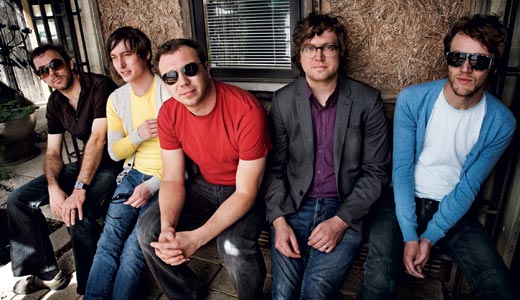 Gomez tonight
Gomez shouldn’t be that unfamiliar. The Brits’ version of “Up On Cripple Creek” appeared on Endless Highway, the 2007 tribute CD to The Band, which featured My Morning Jacket, Death Cab for Cutie and other folks covering the group. Gomez play a free in-store at ear X-tacy (1534 Bardstown Road, 452-1799) at 6 p.m., and then again Wednesday at Headliners (1386 Lexington Road, 584-8088).

Taylor Guitars
First Quality Music (7006 Trade Port Drive, 995-5651) will host one of a handful of Taylor Guitar road shows at 6 p.m. on Tuesday, June 9. This promises to be insightful for anyone with a keen interest in guitars, as Taylors are some of the best acoustics ever made. Expect folks from Taylor’s factory (Video: www.taylorguitars.com/video/factory-fridays), as well as a “Petting Zoo,” where customers can play a variety of models. Admission is free.

Music Cast
Nautical Fox plays this Wednesday at Nachbar (969 Charles St.), and they visit us to talk all things. Listen at Bluegrass Catastrophe (bluecat.leoweekly.com).