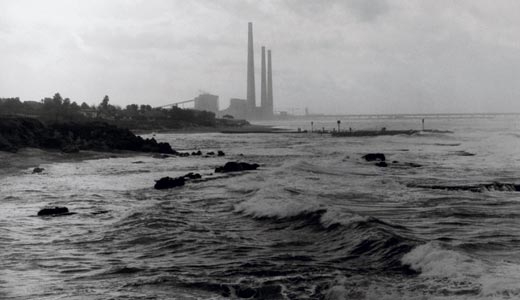 Drive down any good stretch of rural highway in America, and your view is peppered with billboards and marquees directing you to “Eat at Joe’s,” “Test Drive a New Acura” or “Trust Jesus.” Along with the selling of cheeseburgers and gasoline, the Word of God is a consistent part of our commercial culture. Photographers Sam Fentress and Michael Diaz’s exhibit, which opens at The 930 Art Gallery Friday, reflects the way modern capitalist culture has shaped spiritual expression in both America and Israel.

Diaz, a student at the Southern Baptist Theological Seminary, spent 10 days in Israel in January. At first glance his work appears scenic, like a typical travelogue. The craftsmanship is the distinguishing factor; his hand-developed black-and-whites highlight his technical skills.

But his work transcends technical expertise. Interested in human interaction with landscapes, Diaz reflects his attempt to understand the destruction and disregard people lay on the resources of our world; with these historical sites in particular, he examines how land with rich history has been changed by modern culture.

The symbolism most Christians associate with the birthplace of Jesus and where David slew Goliath draws myriad parables that make up the coveted history of that religion. But what Diaz found at these sites mostly lacked for recognition of that history. At the Sea of Galilee, the first point of his journey, he was shocked to find a giant water park with seven slides and a large hotel.

“I felt like I was in ‘The Twilight Zone’; it was completely bizarre,” he says of the park, situated across the street from people living in significant poverty.

But the history of these places is why making a spiritual pilgrimage has been part of religious traditions for centuries. Before the modern age, people would spend a life’s savings and face possible death to make such a journey. Now you can go online and choose your Pilgrimage Tour I, II or III — with enough cash that can include a detailed destination plan and personal tour guide.

The commoditization of this spiritual journey is also something Diaz finds disturbing. The ease of making such a trip during a time of war and turmoil in the region — where people’s primary concern is which souvenirs they will purchase — made him feel guilty.

“It’s such a reflection of who we are now as a culture,” he says. “In the States, we are driven by a capitalist mentality. Even though this may not be the best idea to buy this, I’m supporting someone else. That’s the way the world works.”

From the prayer stool to the plastic crosses, anyone can get closer to God for the right price.

Before you could win Jesus on toast in an eBay auction, consumerist America had taken religious messaging to a new level. Fentress’s book “Bible Road: Signs of Faith in the American Landscape” documents 30 years of Christian symbolism in roadside “art” from 49 states. The photographs on display in this exhibition come from the book.

Cruising the streets of Chicago for inspiration during his graduate studies, Fentress snapped a photograph of a car bearing a large cross. It was decorated with words from Scripture. He ignored the photo for several years, until a student brought him one of a barn covered in Scripture verse.

“It slowly gelled in my mind that this was interesting territory,” he says.

Starting with Catholic sculptures, the St. Louis photographer became more drawn to the signs and graffiti he found nearby.

A majority of his subjects are the advertisements and graffiti we see on cars, telephone poles and yard signs. Fentress says Christian messaging is everywhere — from farm posts to subway cars. More than just those in the Bible Belt see the influence of Jesus advertising.

Michael Winters, curator of The 930, which is affiliated with a Southern Baptist denomination, says he brought the two artists together to put on a unique exhibit. “Most galleries showing contemporary art don’t want to exhibit art with religious themes,” he says. “Religion and contemporary art don’t really go together, but as this show makes clear, religion is very much a part of our contemporary world.”