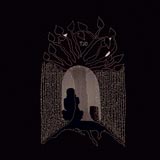 Louisville native Tara Jane O’Neil’s first album for K Records, A Ways Away, is a gorgeous atmospheric folk jaunt that makes desolation seem desirable. While some of her recent work has adopted a more intimate and traditional folk approach in the vein of Linda Perhacs or Townes Van Zandt, A Ways Away is lush, weird and engrossing. Psych folk is the closest reference point, as the spinning textures and ambient flourishes are reminiscent of The Incredible String Band and newcomers like Grouper. Yet TJO is also entirely something else. As beautiful as it is haunting, “Beast, Go Along” is the best representation of the album as a whole. Morricone-style, reverb-saturated riffs drift in and out, while light touches of steel guitar add a mind-bending twang — all of which ride delicately over swells of thick, warm drones. It’s a delicious dirge meant for late night desert wandering. While firmly cemented within the parameters of cosmic American music, TJO’s A Ways Away reveals many facets that only get better with each listen.