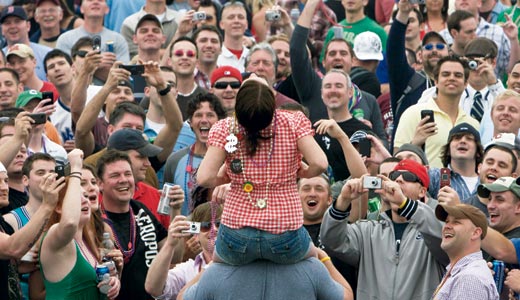 It is difficult to explain what it’s like to actually be there, at the Infield on Derby Day, to someone who’s never been there before. Prior to last Saturday, I hadn’t set so much as one foot onto Churchill Downs property, despite being from these here parts, and all of the stories I heard about Derby’s Bacchanalian escapades did little to prepare me.

To be sure, the Infield is where the common rabble congregates downwind from the perfumed, aristocratic gentry of Millionaire’s Row. Street urchins, college students, gambling addicts, weekend drunkards, pregnant baby mamas, hat fetishists and other assorted lower castes engage in behaviors that normally get them arrested outside this magical realm of the Twin Spires. Here, the most dangerous and depraved individuals are allowed to basically roam free so long as they remain only a threat to themselves and keep away from the high-rollers.

Speaking of which, access to the Infield is made notoriously difficult by a claustrophobic underground passageway that serves to both keep the human herds flowing smoothly and bottleneck the chic, cigar-smoking denizens of the Paddock.

Emerging from this tunnel, time slows. The idea is to keep pacing around and drinking and looking at all of the bizarre creatures. This can occur for a good while, and is peppered with intermittent trips to overcrowded and morally reprehensible “rest” rooms. Although the occasional JumboTron offers the mentally competent a chance to observe races in progress, the Derby is by and large ignored here, the focus being to consume as much alcohol as needed to fuel what I like to call “Feats of Strength.”

Most impressive are the porta-john races, wherein contestants are hoisted atop one end of the plastic outhouses with the goal of successfully making it to the other end without falling or being detained by either rent-a or actual cops. The most exciting two minutes in sports will occur less than 50 yards to their left, but watching fellow human beings foot-race over giant boxes of actual human waste is suddenly more enthralling.

Eventually all of this excitement tires you, and your only option is to lie upon the questionable grass or overturn a metal trashcan and sit on it, like me. During one of these respites I had the pleasure of making the acquaintance of Brendon, a Churchill Downs employee who had just finished his shift, ready to take in the races.

“Strange as this might sound, but this ain’t even all that rowdy,” he says. We chat about the horses, our betting strategies, the alcohol tax and the recession, until I excuse myself to get a hamburger.

I stand in a line and am told they are out of hamburgers, only corn dogs. I acquiesce, purchase an overpriced, genetically modified dog and sit relatively far enough away from anyone else to avoid swine flu. I look around and think, Brendon’s right. It’s not as bad as I thought.

Halfway through my meal, a lumbering, obese man in overalls grazes past me and, with a deep belch, lets forth a drizzle of tar-black vomit that rains down on me, my corn dog and whatever hope I had left for our species.

But I guess you’d have to be there to believe it.

Home for the Derby

Blame it on the alcohol