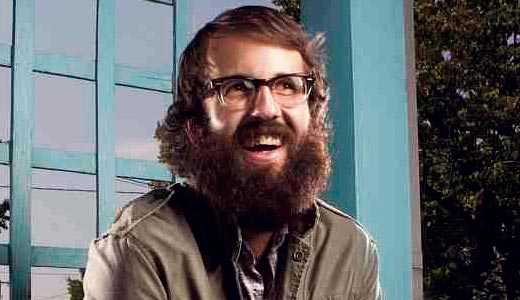 In case you needed proof that honesty isn’t easy, listen to William Fitzsimmons’s The Sparrow and The Crow.

Born to two blind parents in Pittsburgh, the Jacksonville, Ill., songwriter’s album amounts to a 12-song apology to his ex-wife. Built around hushed vocals, accordion, acoustic guitars and earnest melodies, Fitzsimmons is forthright in his explanation of the record.

“It’s not marketing. It’s one of those things I went through. I wrote a bunch of songs about it to help me get through it and specifically communicate stuff to my ex at that point,” he says.

“I speak candidly about it because I wrote a record about it. I don’t like to be overly mysterious, because I think music should help people.”

Not all of the tracks weigh a ton — “Good Morning” and “You Still Hurt Me” stay relatively upbeat in the vein of Simon & Garfunkel, and Fitzsimmons is far from somber in conversing with fans, maintaining a blog appropriately named “Musings From The Beard.”

Sparrow was the No. 1 singer-songwriter album on iTunes last year. The opening song, “After Afterall,” appeared on an episode of CW’s “One Tree Hill,” and he’s shared the stage with the likes of Madeleine Peyroux and current tourmate Rosi Golan.

Sparrow’s title comes from Fitzsimmons’s upbringing surrounded by animals common and not so common.

“My mom was a little bit crazy with pets. We had guide dogs, crazy loud talking birds — cockatiels, parakeets. She currently has a big African talking gray parrot; it can recite on command everything my father says.”