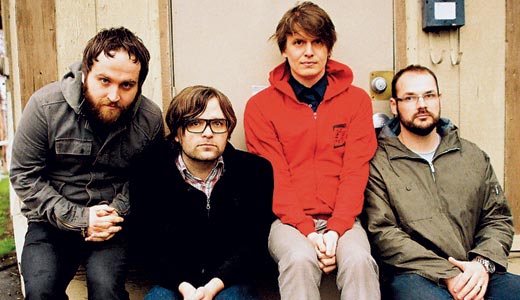 Watch the screens and bookshelves closely over the next few years — you might see Nick Harmer’s work.

Death Cab For Cutie has helped define Harmer as a musician, but the longtime cabbie’s passions extend far beyond amps — mainly to a work-in-progress detective novel.

“It’s funny — I had aspirations when I was in college to pen the great American novel,” says Harmer, who developed a keen interest in hardboiled fiction thanks to quality time in airports traveling with the band. “There are a few writers out there who take genre fiction to a new level. You read enough of those and you start to see a formula.”

The key is not taking the work too seriously. “When you take the pressure off making something important, it’s liberating,” he says.

Harmer is trying his hand at film, and recently completed a rough draft of a screenplay called “Diet Vampire.”

“It’s about a coven of fat vampires. They’ve been feeding on Americans, we’ve been clogging their arteries, now they’re the subject of shame and scourge,” he says. “Normally they fit into skinny leather pants.”

If that sounds like a plot tailor-made for Alan Ball’s “True Blood,” you’re not too far off. In fact, it’s probably only a matter of time before Ball discovers Harmer’s treatment: Nick’s sister has a recurring role as a bartender on the show.

Sideline creative endeavors are becoming a trademark of Death Cab, which has been together for more than a decade and saw its first album, Something About Airplanes, reissued in deluxe fashion by Barsuk Records last year. Seeing its maiden voyage recast was akin to looking at an old childhood photograph.

“The most exciting thing about the reissue was it included a recording of our very first show in Seattle,” Harmer says, noting the band’s antiquated stage banter. “There’s a moment where [singer] Ben [Gibbard] says, ‘We’ve got tapes for sale in the back for $3.’ It’s hilarious.”