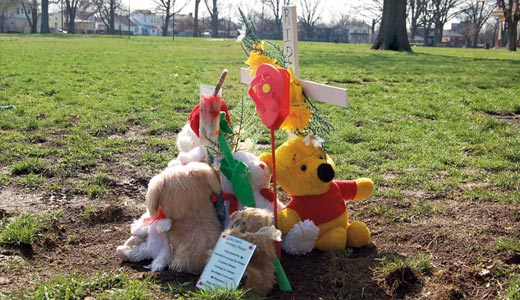 Troya Sheckles was sitting on a bench in Shelby Park last month when she was fatally gunned down in broad daylight. Just weeks earlier, the young woman had reluctantly agreed to be a key witness in a double homicide case. She was terrified.

For months the 31-year-old had dodged investigators to avoid getting involved, but prosecutors finally tracked her down and said they would have her arrested if she refused to cooperate with their investigation. Ultimately, Sheckles acquiesced, agreeing to testify against Lloyd Hammond for a pair of shootings in 2006.

“She was fearful of her life,” says attorney Clark Baird, who previously defended Sheckles in an assault case. “She saw [Hammond] kill a man in cold blood right in front of her. He held a gun to Troya’s head. She was very fearful; she didn’t want to see him in court.”

In the summer of 2006, Hammond and an accomplice allegedly broke into the west Louisville home shared by Sheckles and her boyfriend. The robbery turned violent when Hammond threatened Sheckles with a gun and then fatally shot her boyfriend, according to police. Later that night, Hammond allegedly killed his own accomplice to cover up the crime.

Although police will not say whether they believe Sheckles was murdered to prevent her from testifying, the victim’s relatives suspect this might have been an act of retaliation, fearing they might now be targeted as well.

“One of the things they’re concerned about is information they could possibly have that other people may be aware they have,” says attorney Derwin Webb, who is representing the family.

The victim’s relatives plan to meet with Commonwealth’s Attorney David Stengel later this week to discuss the protections offered to witnesses who might be in danger. Eventually, they hope to learn whether Sheckles was in fact murdered because of her cooperation with law enforcement. But at this point, police have identified no suspects and are unwilling to speculate about whether the murder can be linked to Hammond, who was incarcerated at the time.

Although the investigation into Sheckles’s death still is in its early stages, the murder raises questions about how far law enforcement should go to protect witnesses. Given Kentucky is one of only 14 states that offers a witness protection program, it would seem the commonwealth goes above and beyond. But it turns out the state program intended to safeguard witnesses is widely unknown and limping along on a skeleton budget.

The commonwealth’s attorney’s office would not say whether Sheckles had asked to be placed in the state’s witness protection program, and the lawyer representing the woman’s family said he was unsure whether she did.

With an under-funded and underachieving program that has virtually no public presence, it’s possible the victim never even knew such protection was available.

In 1998, state lawmakers created a witness protection program to safeguard crime victims, witnesses and their immediate families. Since then, the program has protected five to eight applicants annually from around the state, with most requests coming from Jefferson County.

Specifically, the program provides witnesses who qualify with protective measures that can include an officer escort to and from work, having police posted outside a residence, or temporary relocation to a hotel. In some instances short-term relocation to another county or state is provided, but the law only provides these protective services for up to six months.

“It is an important tool for prosecutors,” says Allison Gardner Martin, a spokeswoman for Attorney General Jack Conway. “Many times people who are required to testify at trials may have some fear or a relationship with the individual that causes them concern. It has been successful in protecting witnesses who otherwise may not have come forward to testify for trial.”

The Kentucky Prosecutor’s Advisory Council — a nine-member panel appointed by the governor — is in charge of administering the program’s funds and reimbursing local authorities for expenditures associated with witness protection.

When the lawmakers approved the program more than a decade ago they earmarked $200,000. Since then, no additional funding has been provided.

Currently, there’s only $49,000 remaining in the program’s coffers, an amount soon to dwindle to $39,000 if two pending witness protection requests are approved as expected.

For the past two fiscal years, the attorney general has asked the governor and state lawmakers for more funding, but to no avail.

Given commonwealth’s attorney’s offices around the state are being forced to cut costs and furlough employees, it could mean witness protection will be off the table as an option in the near future.

“They don’t necessarily have those funds available within their local offices to cover those costs,” Martin says. “They rely on the funds being available through state government.”

In Kentucky, witness protection is so limited that at least a handful of state officials were befuddled when asked about it, even though their positions are tied to the justice system: Republican Sen. Robert Stivers, chairman of the justice and judiciary committee, had not even heard of the program, and Jennifer Brislin, spokeswoman for the Justice and Public Safety Cabinet, was unclear on the details.

Eddie Woods, co-founder of the LIFE Institute, a youth outreach organization that works with at-risk families, says with such a weak witness protection system in place, people who live in high-crime areas are less likely to come forward.

The Sheckles murder has shaken up residents more than usual because it appears to have been a brazen public execution of a witness, according to Woods, making those already apprehensive even more hesitant. Prosecutors and law enforcement need to do more than encourage the community to come forward, he says.

“There has to be an ongoing campaign to let the public know you’re going to get some harsh penalties for even so much as touching a hair on the head of a witness,” he says. “There has to be at least that much effort to show what we’re going to do to protect witnesses. Otherwise, it’s not going to happen.”