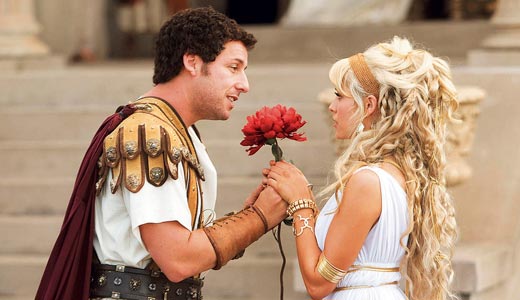 Would you leave Adam Sandler alone with your kids? Neither would we, but that’s only part of the fun in this living cartoon from Disney. While putting sis Courteney Cox’s young’uns to bed, he tells them outlandish tales, starring himself. But the next day the stories come true! … sorta. That leads him on your basic trademarked Voyage Of Self-Discovery And Personal Growth. Co-stars yummy Keri Russell, Lucy Lawless, Carmen Electra and Guy Pearce.

Jim Carrey’s back, once again trying to capture lightning in a bottle. This time he’s a divorced loser with a boring job, desperate for something, ANYTHING, to recharge his life … and he finds it: a personal commitment to say “Yes!” to every opportunity that life hands him, no matter how stupid, dangerous or costly. The results have a sort-of make-it-up-as-we-go feel to them, but all in all a fun PG-13 ride. With Zooey Deschanel, Terence Stamp and Molly Sims.

The first Blu-Ray release of Steven Segal’s screen debut. Before becoming a bloated bellicose butthole, he was a quick and wicked-nasty action star; this flick is one of his best. Check him out from back in the day along with Pam “The Black Beauty” Grier and Henry Silva.

In 1963, Liz Taylor and Richard Burton made a $200 million version of “Cleopatra” that bankrupt the entire Hollywood studio system. Why? Ego: They wanted to top this version, now available in a 75th Anniversary Special Edition from Universal. Claudette Colbert is the Queen of the Nile, with Henry Wilcoxon as Marc Antony, all under the direction of Cecil B. DeMille. A truly remarkable film, made on a scale never before attempted, DeMille had his massive recreation of Rome buried in the sand after filming to prevent future filmmakers from learning how he achieved such majesty. A legendary offering that’s well worth the price — watch for uncredited cameos by John Carradine and David Niven.

Miramax’s attempt to snatch an Oscar. They failed. Meryl Streep is a stern nun, watching Father Philip Seymour Hoffman get a bit too chummy with a troubled youth. She can’t prove anything, but everyone — including Amy Adams and Viola Davis — act up a storm.

Yeah, it’s just another crazy slasher flick, but livened by a script based on Ted Dekker and Frank Peretti’s excelled supernatural novel. A pair of couples are trapped in a spooky old house with a maniac who claims to have killed God — and will do the same to them unless they sacrifice one of their own.

A timely and terribly disturbing PBS doc on America’s addiction to consumerism and the subsequent multi-trillion-dollar debt that is destined to end our 200-year-old experiment in democracy.

The world’s very first animated DC Comics Superman cartoons, each hand-drawn by master animator Fleischer. A two-disc set with all 17 lavish shorts, each painstakingly reproduced from the original masters, each a PhD in storytelling — for a buck-and-a-half apiece!

We were prepared to write this Morris Chestnut/Taraji P. Henson drama off as more wimpy BET cable-ish drivel, but the hook of a long-married couple, tempted by glimpses of the lives of others after a car wreck, is so engrossing and intimate that we really got sucked in. Worth checking out.

The producers wanted to recreate the spark of the original Peanuts cartoons, so they gathered together much of the early voice-cast to help Snoopy visit his puppyhood friends and siblings at the Daisy Hill Puppy Farm. Be warned that it screws with Peanuts history and conventions — like showing adults! — but is still a kid-pleaser.

THE DAY THE EARTH STOOD STILL

Everything that is wrong with the movie industry today. We’ve wasted enough ink: Ask for the original.

A female-empowerment look behind the closed doors of orthodox Jewish life. A rabbi’s daughter must marry her father’s protégé after her mother dies unexpectedly. Stalling, she asks him to let her spend a year in religious studies, where she meets a mysterious older woman who opens her eyes to a greater world.

THE TALE OF DESPEREAUX

A lot of critics crapped on this little animated flick, but we loved every frame. Boring? Hardly! Just not the frantic pace than you’re used to. Lay back and enjoy the quiet exploits of a fearless mouse (Matthew Broderick), a rat who yearns for the sun (Dustin Hoffman), a sheltered princess (Emma Watson) and the rest of the terrific voice-cast in this charming tale of finding your place in the world.

A hilarious zombie/Kung Fu outing from Japan. A pair of slackers must dispose of their boss’s dead body, so they head to the local toxic waste dump. But before they can finish the job, they’ve awakened an army of relentless undead ju-jitsu-ers. Entertaining as hell.

Fans of Joe Mantegna will enjoy this family fare about an old Italian gent who unexpectedly arrives from Europe to meet his American family for the first time. A lot of homespun wisdom and old-world common sense bring the family together in unexpected ways. Aaah.

THE PAPER CHASE: SEASON ONE