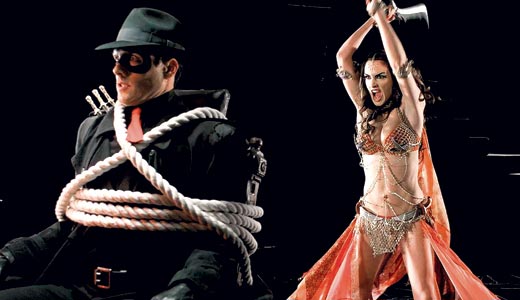 Kate Winslet won an Oscar for her portrayal of the mysterious older woman who has literature-sex with a 15-year-old German boy in this one. A decade after their secret affair, the now-lawyer finds her on trial as a Nazi war criminal, and he comes to understand that he holds the key to saving her life, at the cost of his own future. More entertaining than most Oscar movies we’ve seen.

Frank Miller of “Sin City” fame tries valiantly to capture the impact of his first inspiration: Will Eisner’s legendary dark, sexy 1950s comic strip about a former cop who returns from the grave to fight evil. The stark graphics are too reminiscent of “Sin City” to provide the shock that Miller was looking for, but the images do evoke Eisner’s visionary landscape beautifully. Going for an “R” rating would have helped, but we won’t quibble: We liked it. With Gabriel Macht, Samuel L. Jackson (going completely over the top), Scarlett Johansson, Eva Mendes and a host of others.

If your cable provider doesn’t carry HDNet, call them and raise hell. That’s where we first saw this excellent doc on Plato’s Retreat, the legendary sex club of 1970s NYC. A fascinating look at how America’s burgeoning sexual freedom — maybe your own parents — crashed against a wall of drug abuse and disease.

Wow! A fun and original indie vampire tale that shows just how far you can go with a good idea and zero cash. A beautiful artist (Sarah Farooqui of “Lost”) is seduced into trying a drug that makes her a portal to a dimension of blood-sucking evil and unimaginable pleasure. Excellent.

We must be the only guys on the planet who remember this rags-to-riches sitcom starring Malcolm-Jamal Warner from “The Cosby Show” and the phenomenal Eddie Griffin. Something of a black “Odd Couple,” the two unexpectedly become co-owners of a sports bar, while Griffin continues to drive his beloved tow truck. Lots of wacky schemes and star-turns by Griffin.

MASK OF THE NINJA

Those fair-haired lads at SpikeTV dreamed up this goofy actioner starring Casper Van Dien as a police detective on the trail of ninja assassins, employed by a ruthless megalomaniac, hot on the trail of a secret biological weapon. Very entertaining, if dumb as wood.

While the box art suggests this is a “Porky’s” wannabe, the truth is a bit deeper. Steve Lattery wants nothing more out of life than his friends, some brewskis and endless rounds of golf — until he realizes that his lack of gumption has killed his career and canceled his dreams. What he needs is a do-over. Do they really exist?

Former nudie/scream-queen Brinke Stevens costars in this gay-themed horror sequel to “October Moon.” Two years have passed since horrible murders shattered the lives of a group of friends. Now those who survived are once again forced to revisit that time of torture and mayhem — and possibly repeat it!

If you caught this on the SciFi Channel, as we did, you’ll want to snatch this up to see all the stuff they cut out. A grotesque parasite causes painful, bloody spikes to burst from the skin of its host, sending it on a rampage of murder and carnage to spread the infection. Within this nightmare a young couple and an escaped convict must work together to escape. Features Jill Wagner, that hot “Mercury Chick” from the car commercials.

The tale of the 47 Ronin — loyal Samurai followers of a disgraced warlord who band together to kill those responsible for the systemic corruption of the Shogunate, well aware it will mean their own deaths — is known to every Japanese schoolchild. Of the scores of movie versions, this Kunio Watanabe offering may be the best. Highly recommended.

First Blu-Ray release of a virtual-reality movie that had the misfortune of coming out at the same time as “The Matrix.” Craig Bierko and Vincent D’Onofrio create a virtual 1937 L.A., leading to the unexplained death of their boss. And when his daughter, Gretchen Mol, shows up, the line between fantasy and reality is lost amid passion and blood. With Armin Mueller-Stahl and Dennis Haysbert.

While never in the same league as, say, “Cheers,” this good little sitcom about two brothers and their single-plane airline on Nantucket had its moments. And what a cast! Stars Tim Daly, Steven Weber and cute little Crystal Bernard were joined by the likes of Tony “Monk” Shalhoub, Thomas Haden “Sandman” Church and Farrah Forke. All eight seasons on 27 discs.

WINTER, THE DOLPHIN THAT COULD

Created by the Clearwater Marine Aquarium in Florida, this is the behind-the-scenes story of a dolphin that was doomed to die after losing her tail to a crab trap. But through sheer determination — and the help of friends and scientists who worked tirelessly to save her — she survived. One of those friends was 10-year-old Katrina Simpkins, who learned to accept her own prosthetic leg after seeing Winter’s replacement tale. Ask for it at any good, local vidstore or go to SeeWinter.com for more details.