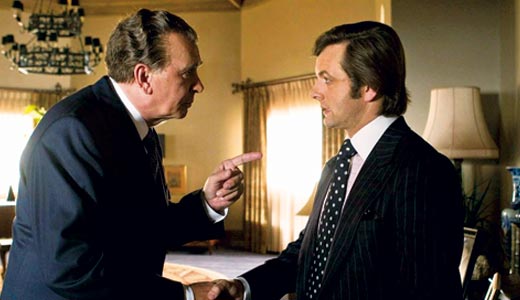 For those readers fortunate enough to have not lived through Richard Nixon’s White House, this is a damn good telling of a seminal moment in American history, when a former President actually said on TV, “[a break-in] is not illegal if the President does it,” implying that the President was above the law. Director Ron Howard gathers an amazing cast — including Frank Langella as Nixon — for this entertaining drama.

Mickey Rourke and Marisa Tomei were both nominated for Oscars for this tale of a washed-up pro wrestler trying to put his life back together and maybe have one more fling with success. Frankly, this was never gonna win, but Rourke had gone so completely whackadoo of late that the Academy was hoping the nom might get him to turn his own life around. Entertaining, and Rourke’s physicality in the role is amazing (Nicolas Cage was originally considered), but all-in-all it’s just a good little drama. With Evan Rachel Wood as the discarded daughter.

The leeches/producers of “Battlestar Galactica” decided to launch this new prequel on DVD “for the fans,” then hold the broadcast premier on SciFi in 2010. You people will fall for anything, you know that? Set 50 years before BG, this space soaper follows two families among the 12 Colonies. Poised on the brink of technology that will give birth to the Cylons, it is their passion, greed and human frailty that will doom us all to an endless parade of this frakking dreck.

A mysterious man wanders into a serene Southern town and kindly offers to build a model of it to immortalize the lives of its inhabitants for their upcoming founder’s day celebration. Enlisting the help of two star-struck young boys to take pictures of the locals, his models seem to suggest — to some — a dark layer of hypocrisy and evil in the seemingly innocent town. But what is he up to, really?

A collection of “Space” episodes, courtesy of the Discovery Channel. With NASA preparing for the 2018 mission to Mars and the first “personal” vehicles for space tourism undergoing tests, now is the perfect time for you to get inspired about your own career in space. Includes spectacular HD footage from the Space Station.

HOUSE OF THE SLEEPING BEAUTIES

We were completely blown away by this German import based on Yasunari Kawabata’s seductive novel. A lonely widower learns of a secret place where he can lie in bed alongside beautiful, sleeping women. But as he lies there, holding a young girl close to him while she innocently dreams, he wonders, “Why don’t they wake up?” and decides to seek the truth behind it all.

INTO THE BLUE 2: THE REEF

The original starred the buttocks of Jessica Alba: glorious, tanned and plump, providing a bravura performance through string bikinis and undulating underwater sequences. For this sequel the filmmakers pegged Laura “Supergirl” Vandervoort’s butt. No slacker in the caboose department, that darling’s derriere is joined by buoyant twin chest-sisters and the rest of her bodacious crew. Guaranteed to hoist your dinghy as she and some guy go scuba diving for treasure.

An indie coming-of-age comedy about 12 friends who spend a lazy summer partying and carousing in deep debauch, each of them knowing that adulthood is waiting at the end. What do they learn? We won’t spoil it.

Anime fans complaining of the “pussification” of the genre should check this out. A routine plotline — a female mercenary and a peaceful young woman find their lives joined by prophecy — distinguishes itself by being intelligent, original and exciting. From the guys who brought you “Noir.”

Long overdue first DVD release of this seminal sitcom and spin-off from “The Mary Tyler Moore Show.” Valerie Harper stars as Rhoda Morgenstern, with David Groh as her husband (in this season, anyway), constantly being harassed by her mother, the superb Nancy Walker. Co-stars included Julie Kavner (“Marge Simpson”), Harold Gould and writer/producer Lorenzo Music — the original voice of Garfield the Cat — as Carlton the Doorman.

THE FOX AND THE CHILD (LE RENARD ET L’ENFANT)

A wonderful live-action kidflick from France about a 10-year-old girl who befriends a wild fox. Narrated by Kate Winslet.

First-ever look behind the curtain of secrecy that is the National Security Agency. Three times the size of the CIA, the world’s largest intelligence agency is able to eavesdrop on nearly all forms of communication anywhere on the planet — including in the private homes of over 500,000 US citizens, without warrant, in direct violation of the Constitution. You should be outraged.

We remember watching reruns of this when we were kids. Hugh O’Brien made a super TV Earp: clean-cut and handsome, an all-around rogue/hero who was devastated when he finally had to take a life. Historically inaccurate, of course, but it still made for one of the best Oaters ever on the small screen. Watch for Denver Pyle (Uncle Jesse from “Dukes of Hazzard”) in several episodes; Glen Strange, who played the Frankenstein Monster more than any other actor, appeared in 1956-60.