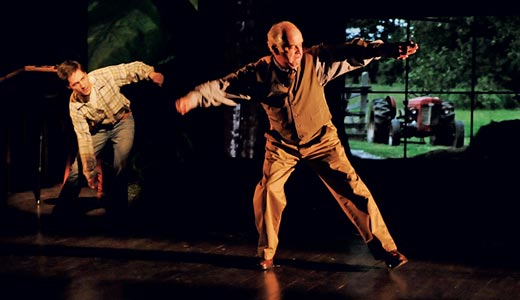 (The Humana Festival of New American Plays at Actors Theatre of Louisville presents “Wild Blessings: a Celebration of Wendell Berry.” Adapted for the stage by Marc Masterson and Adrien-Alice Hansel from the writing of Wendell Berry. Directed by Mark Masterson. Continues through April 26 in the Pamela Brown Auditorium. For tickets, call 584-1205 or visit www.actorstheatre.org.)

Wendell Berry has a knack for making me feel bad about myself. When I read his insightful essays and poems, I wince at the shallow and vain pursuits I have no plans to abandon, at the synthetic trappings of my computer-aided life on a city block whose trees I can’t name. I fear he would find me discouraging. Which is to say Berry is as much a collective father figure that Kentuckians have, and allowing him to have hope for us despite his many disappointments is one of our quieter pastimes.

Actors Theatre artistic director Marc Masterson teamed up with literary manager Adrien-Alice Hansel to bring Berry’s quietly beautiful poems to the stage in a production as lovely as the life he endorses, celebrating Berry’s sincere reverence for community, nature and simple gifts.

As Berry approaches writing and work on his farm in Henry County as acts of devotion, it is fitting that this production’s power lies in its quiet simplicity. The loose narrative crafted from a selection of his poems follows two couples — one young, one older — through the rhythms of the seasons and of life on a farm. This intergenerational approach supports a body of work that spans five decades, from the apprentice farmer and the young man in the city to marriage, childbirth, maturity and, finally, a man contemplating his own old age and impending death. Underscoring these themes is an attention to the rhythms of the natural world, from silence broken each morning in the fields to the comforting fall of night. In Berry’s world and work, God and nature are one, and reverence for God is best shown through care for the world as he created it.

Poetry is meant to be experienced aloud, and by giving the poet a voice off the page, this production allows us to connect with Berry’s work on a more visceral and sensory level. The multi-talented ensemble includes actors and musicians, highlighting the natural music of Berry’s poems through acoustic guitar, fiddle, percussion and hammered dulcimer. Led by composer Malcolm Dalgish, whose dulcimer lends many of the songs an essential ethereal quality, actors Helen-Jean Arthur, Tracy Conyer Lee, Larry John Meyers and Phil Pickens sing and move their way through the poems.

Video designer Donna Lawrence’s digital video landscape also helps us experience Berry’s vision on a sensory level. Her evocative still and moving images ground us in place and time, and the layered effect of a window in front of a back screen allows contrasting tension or complementary synchronicity, depending on the scene. Each image reminds us of all that Berry holds dear.

Indeed, we shallow and vain creatures can learn much from the good life as he outlines it — love your neighbor, your woman, your barn dance, your food grown in your fields. Avoid television, glamour, the government, satellite technology and plastics. It’s a hard act to follow, but like a patient (if often disappointed) father, every quiet admonishment is also an act of love.