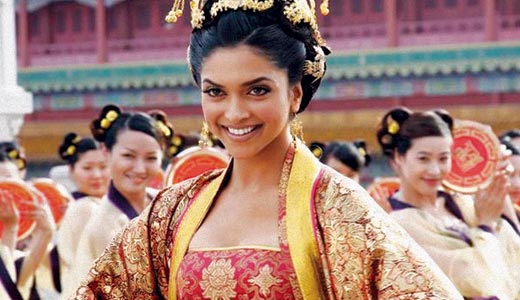 Our favorite bad movie of 2009! (So far.) A crazy mishmash of Bollywood and Kung Fu is served up when a simple Indian cook is declared the reincarnation of a legendary Chinese warrior — and heads off to save a village he has never heard of! Execrable acting, terrible songs, clumsy-yet-colorful dance routines, awkward fights for no particular reason, worse love scenes, nonsensical dialog, inexplicable characters, bizarre plot twists (that are often simply forgotten in the next scene) … We could go on, but trust us, this is simply so riotously, insanely BAD you HAVE to be entertained.

A pair of morgue-workers use the battery from their rusting Gremlin to jumpstart a friend’s 8-foot-tall homemade cadaver — and crash a 3-on-3 basketball tourney! This wildly stupid indie horro-comedy stars destined-to-remain unknowns DeRay Davis, Jasper Redd and Charles Q. Murphy, with Bob Sapp as their reanimated rebounder. Dumb as shit. Our kinda movie!

An extremely European (read “slow”) chiller from France about a young psychiatric nurse whose subway car abruptly halts in a black tunnel where murderous culters await to sacrifice all on board to an insane prophecy.

Josie Lawrence and Miranda Richardson star in this good remake of a fun 1935 chick-flick. A pair of spoiled/bored women rent an Italian villa that they must share with a pair of older crones. Doesn’t sound like much, but this is filmmaking at its best; and as far as we can tell, this version is new to American video.

A Ph.D. course in how to make a simple and effective movie through casting, script and performance. Dustin Hoffman and Emma Thompson are a pair of past-their-primers who stumble into love and hope to win an Oscar along the way.

We salivate whenever Turner Classic Movies releases one of these collections, but this may be our favorite. A quartet of absolutely perfect musicals, beginning with Judy Garland, Fred Astaire and 17 Irving Berlin tunes in “Easter Parade.” The fun continues with “Meet Me in St. Louis” (Judy Garland) and “The Band Wagon” (leggy Cyd Charisse and Fred Astaire); capped off with the irrepressible “Singin’ In the Rain” with Gene Kelly, Donald O’Connor and Debbie Reynolds. We can’t stop dancin’!

THE CURIOUS CASE OF BENJAMIN BUTTON

Brad Pitt, Cate Blanchett, Tilda Swinton and a bunch of CGI computers star in this tale of a child, born extremely old, who becomes younger each day, waiting patiently until he’s “the right age” to love. Has one of those tired “every age has something to offer” touchy-feely chick-flick plots, but what do you expect from The Pittster after all those years with Angelina Jolie? The guy’s exhausted! A good date flick.

THE FALL AND RISE OF REGINALD PERRIN: THE COMPLETE SERIES

This classic BBC series had the misfortune of coming to America during the PBS-British Invasion that included Dr. Who and Monty Python, but it stands very well on its own. Heavily inspired by the Peter Cook/Dudley Moore version of “Bedazzled,” Leonard Rossiter plays a middle-aged Everyman who fakes his own death in order to start again — but the universe has a strange sense of humor about such things. A classic.

The Discovery Channel gets all futuristic on us in this seven-hour/two-disc look at technology that could lead to “Star Trek” transporters and scores of other mind-blowing ideas. From the Building the Future and NextWorld series.

Mira Sorvino stars in this little-known imported two-episode TV mini-series. She’s an archaeologist who enlists the aid of an NYC cop to track down a stolen religious artifact. Yeah, it’s a “Da Vinci Code” rip-off, but a good one; with Scott Foley.

This wickedly dark/funny drama from Florida is a throwback to the ’80s heyday of great indie regional filmmaking. A man is discovered horribly burned but alive behind a church. Laying in a hospital bed, unconscious and bandaged head to foot, a parade of people, each searching for a missing loved-one, files past, each absolutely certain that he is the one they lost.

A worthy arthouse juggernaut starring Michelle Williams as a lost soul, heading for a last-chance job in Alaska. But when her car breaks down in Oregon, she is at the mercy of strangers, her own inner demons and the cruel, invisible rules that society uses to keep people in their proper place.

A fun little anime with more heart than a dozen “real” shows. Inokuma Yawara wants what every girl wants: to be in high school, wear nice clothes, hang with friends and meet boys. But her grandfather recognized her Judo gifts as an infant and is training her to sweep the 1992 Barcelona Olympics.

SCOOBY-DOO, WHERE ARE YOU! VOLUME 2

THE REZ: THE COMPLETE SERIES