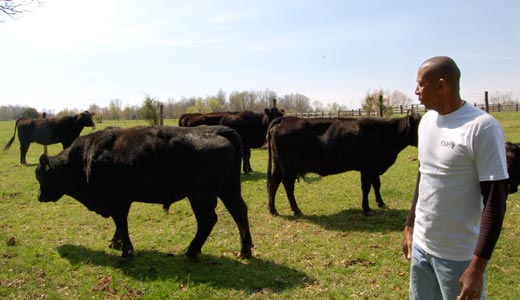 On a large swath of land behind his mother’s house, Joe Trigg operates a massive agricultural laboratory of sorts, growing lettuce, greens, turnips, basil and tomatoes for both low-income residents and high-end eateries. The 130-foot-long greenhouse is filled with vegetables, concrete pools and solar lighting. It’s a well-equipped hydroponic farm.

Discovered in the 19th century, hydroponic farming is a system where the plants float in a bubbling pool of mineral nutrients instead of being planted in the ground. Trigg learned the method while in the military.

The advantages to this technique include a faster growth rate, fewer diseases and better produce.

Hopping in his black Dodge Ram pickup, Trigg speeds along a narrow state highway through Glasgow, Ky., a small town outside Bowling Green. Fresh country air blows through the truck’s cabin. The natural air conditioning is a relief until the distinct whiff of chicken manure burns your nostrils and eyes.

It’s an unadulterated stink, like a mix of sulfur and spicy mustard.

“In farming, manure is your best friend,” Trigg says. “It takes about three days to break down, so we sprinkle the fields with it to fertilize.”

The truck stops at the entrance to a 100-acre beef farm where he owns 45 Black Angus cattle, a hornless herd that includes a one-ton behemoth bull named “Lucy Boy” with a bloodline that cost $3,000.

The 50-year-old retired Air Force sergeant, who served three tours in Iraq defusing improvised explosive devices, says he has a vision. For the past few years, Trigg has been investing money, plowing fields and working to bring his fresh food to Louisville neighborhoods that lack healthy fare.

Specifically, Trigg wants to serve west Louisville because it’s an untapped and underserved food market, a perfect candidate to partner with local farmers. Last year, he was accomplishing that goal by working with a local farmers market at Victory Park. The business relationship deteriorated, however, leaving Trigg Enterprises, a business he started with his four brothers, holding pounds of produce, which he later sold to Glasgow’s housing authority and public schools.

In response to last year’s fumbles, Trigg created a subsidiary company, Farmers2City Connection, to handle the distribution, and now he’s prepared to produce and sell the food himself.

But after taking on additional financial risks, this growing season may be his last attempt to feed Kentucky’s largest city if things do not go as planned.

“I’m putting my hope in this,” Trigg says. “My brothers will run me out of the state of Kentucky if we end up this year like we did last.”

It’s a dream he discussed this past weekend in Louisville, alongside a panel of other advocates dedicated to bringing healthy food to Louisville’s food deserts, called such due to a lack of healthy food and limited transportation for residents to get to and from groceries.

The panel discussion was part of the city’s first annual food summit, sponsored by the Community Farm Alliance in an effort to connect small farmers and urban consumers through the locavore movement.

“It’s hard for local farmers to get their food into the city,” says Josh Jennings, a community outreach coordinator with the Center for Health Equity. “What’s necessary in Louisville is building new partnerships and increasing the momentum to get local farmers more exposure.”

Metro government has made significant strides in improving the access people have to nutritionally adequate and safe foods in their communities. In January, the health department launched the “Healthy in a Hurry” initiative, partnering with two local corner grocers to help bring fresh foods to low-income neighborhoods. Now, Jennings says the city is looking to connect local farmers like Trigg to the initiative.

And just last week, the city submitted a grant application to the Kentucky Agriculture Development Fund. If the $120,000 grant is approved, Metro will create a two-year, full-time position in the economic development department dedicated to connecting Kentucky farmers to the Louisville market, which according to the Regional Farmers Market Feasibility Study is a hefty $3 billion consumer industry.

Metro government paid a consulting firm $150,000 to conduct the feasibility study, aimed at developing strategies for the city’s food economy.

“The study helped us map the regional food system and how to connect the supply and demand,” says Susan Hamilton, assistant director for Metro economic development. “We have to determine what percentage of that could be local foods for farmers and producers growing products for restaurants, farmers markets and community kitchens.”

Besides trying to find a niche in the Louisville market, Trigg, who has been farming for 28 years, wants to organize other African-American farmers and help them deliver produce to Kentucky’s urban centers. To do so, he’s been working closely with nonprofits and public universities, such as the University of Louisville’s Muhammad Ali Institute for Peace and Justice and Kentucky State University’s Land Grant program.

Dr. Marion Simon, a specialist with the program, says it’s important that local farmers are able to sell in metropolitan areas.

“The food is fresher and it tastes better,” she says. “You’ll have more consumption of quality foods if it’s locally grown. With today’s myriad of health problems like obesity, fresh food coming into the large urban areas has a definite advantage for our health.”

About 97 percent of Kentucky’s 82,300 farms are small, part-time operations. There are 5,000 farmers in the small farm program who are eager to get their produce into urban areas, but who face logistical and legal obstacles.

“They have to travel a distance to reach something like a farmers market,” Simon says. “And there are also some restrictions as far as legal requirements for being able to sell. For instance, food safety for meat products or canned jelly.”

These are among the many hurdles Trigg has faced in his efforts to ship his products to Louisville. Other small farmers are scared by the financial risk, he says, and any assistance from local government or public universities will help.

Part of the problem, according to Trigg, is the fact that farmers markets don’t allow low-income consumers to use vouchers or food stamps.

Also, vendors and consumers aren’t used to planning ahead of the growing season, which makes establishing a consistent pipeline more difficult.

Standing on the hilltop overlooking his cattle farm, Trigg bellows out a loud moo to attract the herd. Climbing over a barbed-wire fence, he finds the cattle huddled in a corner of the field.

Caressing their sleek, black fur, Trigg talks about how few African-American farmers are left operating in the state; the Glasgow native says agriculture is becoming a lost art. In 2007, the U.S. Department of Agriculture reported there are 668 black farmers operating in Kentucky, compared to 121,000 white farmers.

Many of the farms in Glasgow were once black-owned, but after a generation moved to the cities for better opportunities, the neglected land was seized. Part of the reason Trigg now wants so desperately to funnel fresh produce into west Louisville is to reconnect with those who moved to the city.

For this growing season, Trigg has hooked up with the California Neighborhood Farmers Market. The advocates behind this undertaking say they’re not interested in turning an immediate profit, instead focusing on providing residents with affordable items.

Walking back to his pickup truck, Trigg explains that his workday does not end when the sun sets. Rather, he’ll spend the evening sending e-mails and making phone calls about his vision.

“I want to help other black farmers learn the trade. My goal is to help black farmers help feed black people,” he says. “If it turns out profitable or economically sustainable, then maybe others will get involved.”

For past coverage on this topic in LEO Weekly, check out "Fruit of their efforts" and "Full of it," both written by Phillip M. Bailey.