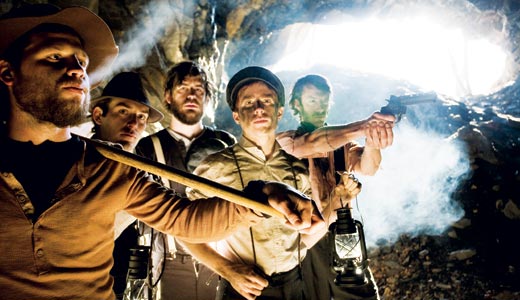 Someone should set up a Louisville P.O. Box for Dr. Dog.

With appearances at Lebowski Fest, Forecastle Festival and Wilco at Slugger, this Philadelphia export continues to stroke Louisville tonight at Headliners Music Hall.

Dr. Dog’s harmonious methods, lately dug on their newest, Fate, are picking up steam: They play Lollapalooza in August, have sold out the El Rey Theatre in Los Angeles and several dates in New York.

Opening the show are Cave Singers and Golden Boots.

Based in Seattle, Cave Singers make a return trip to Louisville — they previously opened for Black Mountain. Their 2007 record, Invitation Songs, is out now on Matador, and they’ve been added to this year’s All Tomorrow’s Parties festival in England.

Golden Boots are Philly natives who relocated to Tucson, Ariz., share space on Park The Van Records with Dr. Dog and have opened for Magnolia Electric Co.