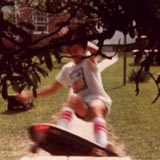 Wavves is the one-man project of distortion architect Nathan Williams, or as I call him, No Age Jr. No Age is a good reference point for Wavves, as both groups consist of skateboarding SoCal dudes who appreciate noise-damaged pop. Williams’s eponymous debut comes replete with Brian Wilson harmonies, hummable melodies and swells of screaming, treble-saturated feedback. Sure, that sounds like Psychocandy, but since The Jesus & Mary Chain could never follow that album up themselves, I’m cool with other bands trying.

Williams knows exactly what he’s doing, as most song titles feature the words “beach,” “demons,” “goth” and “girls.” Despite the shtick, Wavves demonstrates solid songwriting on the askew sunshine of “No Hope Kids,” and an appreciation for ambient exploration on “Beach Goth.” Wavves is a great listen, especially in warm weather. However, I would also urge you to check Indianapolis’s excellent Marmoset. They mastered the psychedelic, no-fi garage thing long before the term “shitgaze” was coined.