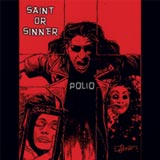 Think early Outkast if they’d hailed from Louisville and made the attendant references and you’ll have some sense of Steven Johnson’s — aka Polio’s — sound. With his new release, Saint or Sinner, Polio quotes Elton John, meditates upon the recent recession and samples Phil Collins in an extremely humorous fashion. While there are some offensive, lowbrow sexual references that I should not quote here, they don’t detract from the general originality of the album. Any reference to “ho’s” is covered by the less obvious lyricism and creative instrumentation, the utilization of piano and acoustic guitars on several tracks. The thing is, I’m not predisposed to liking hip-hop music, and I still found myself singing along to his catchy choruses and nodding my head in rhythm. That is the mark of great artistry; if you can win over a curmudgeon like myself, you’re doing something right.