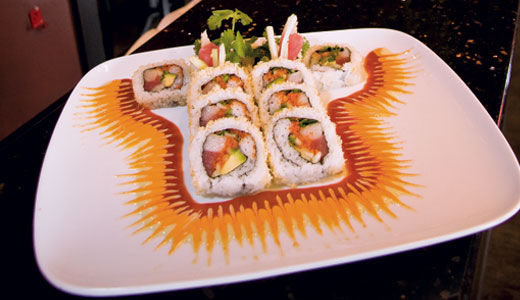 Not so long ago — well, back in the early ’80s — the only place in town to get sushi was a downtown diner, where a Japanese woman came in on Thursdays to produce a special sushi lunch for a small but ardent corps of cognoscenti.

A generation or so later, more than 20 eats emporia provide Japanese fare across the metro area, most of them boasting good to excellent sushi bars. You can even buy sushi boxes at local grocery stores.

Just about everybody in town, or every sushi lover anyway, has a favorite, and a roster of top spots (Kansai, Sake Blue, Raw Sushi Lounge, Jarfi’s Bistro and Z’s Fusion) showed off their wares last month at the annual Sushi in the City gala. The all-you-can-eat event and competition at the Henry Clay was for the benefit of the Family Scholar House of Louisville.

New restaurants carried off top honors, with a judging panel rating the entry from Z’s Fusion as Sushi of the Year. The audience, however, followed another favorite, voting the “People’s Choice” award to the city’s newest Japanese restaurant, Sake Blue.

Sake Blue, which fills a sushi vacuum in the far East End with its sizable shopping-center venue beyond Fern Creek, near the Gene Snyder and Bardstown Road interchange, wowed the crowd’s eyes with ice sculpture and steaming dry ice, and satisfied diners’ palates with a sterling sushi roll right off the restaurant’s regular menu.

Sake Blue’s Temptation Roll, reported Deb Hall on LouisvilleHotBytes.com, was a maki-zushi roll stuffed with shrimp tempura, asparagus, cream cheese, crab, spicy wasabi mayo and sweet eel sauce, all topped with lots of spicy crab. “The flavor and texture combination was outstanding,” Hall wrote; it was a favorite at her table and, apparently, throughout the audience.

Fine sushi in sophisticated surroundings in Fern Creek, not previously known as a destination for authentic Japanese fare? I had to check this out, so it wasn’t long before I pointed the jalopy eastward for the not-so-long trek from town. (It’s not that bad, really. We added a few miles by taking I-64 from Grinstead to the Snyder, then south to Bardstown Road, where we found Sake Blue right off the ramp next to a Walmart. The 20-mile trip took 20 minutes from Crescent Hill. A trek over to Bardstown Road and then all the way out through Buechel and Fern Creek might have saved a few minutes but likely would have taken an hour at dinnertime on a weekday.)

Sake Blue’s shopping-center quarters are large and spacious, with high ceilings and large windows. Inside is decorated in simple colors of earth and tan, with a red swash and squadrons of tiny lights overhead. The room is divided into three sections: A sushi bar with high stools on the left; dining tables in the center for those ordering sushi and Japanese fare from the menu; and grill tables with wisecracking chefs in toques tossing food and knives around on the right.

Tables are shiny black, set with black cloth napkins. Wooden chopsticks are sealed in white paper envelopes for your protection. Knives and forks, of course, are available upon request.

Diners have the choice of a full menu featuring cooked dishes and sushi, including a broad selection of appetizers, soups and salads, plus a dozen main courses from $12 (for shiitake mushroom ravioli) to $20 (for a Chef’s Select Bento, an assortment of goodies artfully presented in a lacquer bento box). In addition to Japanese dishes, a few Korean items are available, including a delicious Bulgogi (grilled, thin-sliced marinated sirloin and onions, $13).

The extensive sushi menu features close to 100 options in all the familiar shapes — the many maki rolls that appear to be the restaurant’s specialty are also described on the main menu.

Beverages include short wine and beer menus featuring mostly mass-market selections. We shared one of those silver 22-ounce cans of Japanese Ichiban beer shaped like a mortar shell ($6). The sake menu offers 16 selections, from $5 for a glass of domestic sake to a high-end $90 for a bottle of super-premium Japanese brew.

We started with soups and a salad, then moved to the sushi rolls. Chicken mushroom soup ($2) consisted of a salty chicken broth with shreds of chicken, sliced button mushrooms and snipped chives. It was minimalist but delicious. Miso soup ($2) was cloudy and white, laced with a few scallions and excellent in flavor.

The house salad ($2) was a standard Japanese-American restaurant salad, but I like that. Iceberg lettuce, shredded red cabbage and carrot were cloaked with plenty of that tart-sweet, pale-orange dressing that mingles fresh ginger, miso, rice-wine vinegar and orange juice — at least that’s what I use in my efforts to duplicate it at home.

Then the sushi rolls started coming, so much we could hardly keep up.

The Ecuador roll ($14) comes across as a fusion between Latino seviche ingredients and maki-zushi form, artfully plated. “Inside-out” rolls are filled with tuna and yellowtail, spiced with jalapeño and flavored with an aromatic mix of citrus and cilantro. The sliced roll is ringed with an edible decoration in four stripes of bold color and flavor: bright-red hot sauce, pale-green wasabi cream, orange spicy mayo and dark-brown, sweet eel sauce. It’s intriguing and delicious, ultimately the hit of the evening for us.

The Rainbow roll ($10) is a California roll, featuring “crab” and avocado and cucumber within, bright chunks of shrimp, avocado, salmon, tuna and white fish artfully assembled on top.

Crazyfish ($12) is somewhat similar to a Rainbow roll, with battered spicy tuna added for crunch, topped with assorted fish (my wife swears one of them is eel) and striped with spicy orange mayo.

Deep-fried oyster rolls ($8) are stuffed with an offbeat mix of crisp fried oysters, avocado and mild cream cheese, sliced and striped on the plate with pale orange spicy mayo. The cream cheese gently cools the heat of the mayo to make a harmonious combination.

A vegetarian sushi roll, Buddha’s Belly ($7), is wrapped in a pale-green tofu-skin sheet in place of the usual nori seaweed. It’s stuffed not with fish but a variety of textured vegetables: avocado, cucumber, asparagus, carrot and Japanese pickle.

Other vegetarian choices, a rare thing in a sushi bar, include “Vegan Heaven” ($8), bite-size nigiri-style balls of sushi rice topped with veggies, not fish.

The young fellow who greeted us and took us to our table seemed a bit tentative and perhaps new to his job, but once our server Kevin took over, we were clearly in professional hands.

Dinner for two, including a large shared beer, came to $65.72 plus a 20 percent tip. Not a bad price for a high-end sushi bar, and there were so many goodies that we risked taking a bunch of it home. Placed immediately in the coldest part of the fridge, it was still fine the next night, hinting that it had been truly snapping-fresh at service.

Sake Blue features entertainment several evenings, the restaurant’s Sohee Lacey tells us: “Every Tuesday is penny sake and jazz night. Two former members of the Java Men [Craig Wagner and Todd Hildreth] perform that night. Beginning on Thursday [April 9], Odeen Mays from Kool and the Gang and four other members will perform from 6-8 p.m. every Thursday. We’re trying to give Fern Creek and Mount Washington residents a ‘happening’ place to dine since they’ve been so supportive of us since we’ve opened.”