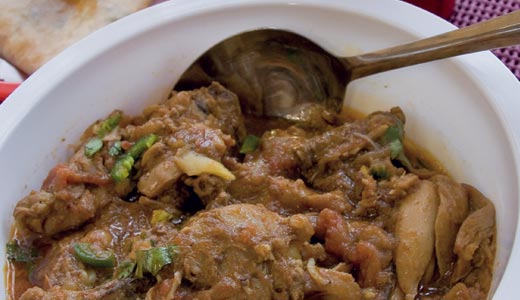 The smiling gentleman forked a sizzling dish of bhaji in my direction. It sizzled gently, wafting wonderful aromas noseward: sweet, caramelized onion and an elusive mix of spices.

This is ethnic-foodie heaven: Omar Fast Food Restaurant, a new eatery featuring the fare of Pakistan, a South Asian nation that most of us have heretofore been more likely to encounter on the front page than on our dinner plate.

I took the plate hungrily.

Gak! I won’t even put ketchup on my french fries. The idea of sullying an authentic ethnic Pakistani dish with le sauce Americaine just about made me gag.

I didn’t want to be rude. “We are very interested in Pakistani food,” I said. “We want to eat this just as Pakistani people would.”

So much for ethnic-food snobbery. That’s globalization for you.

Actually, the simple existence of a Pakistani restaurant in Louisville speaks of globalization in a growing city that’s not nearly as bland as it used to be. Want to meet a Pakistani? If you live in the East End, proprietor Akbar Malik might be your neighbor. He, his wife (the chef) and his brother commute downtown from the Summit area daily, leaving off the kids at Ballard High School.

Their new restaurant opened last month in a nicely renovated storefront near the edge of gentrification. A few old houses across the street appear vacant, but trendy Galerie Hertz is just up the block; turn right, duck under I-65, and you’ve moved from Shelby Park to Old Louisville’s classy Victorians.

In a bid to serve at least two clienteles and maybe more, Omar Fast Food offers a mixed menu. You’ll find simple, affordable American-style fare — burgers, fish sandwiches, fried chicken and wings, just about all of it in the $2 to $3 range. But for the adventurous (and, of course, the Pakistani community), Omar also offers a short list of Pakistani dishes that we’ve found tasty indeed, priced for a recession at $1.99 to $5.99 for main dishes, $4.99 to $6.99 for combos with pita or rice and a simple salad. Fountain and bottled soft drinks are available.

Although the menu is basic and the scene a bit sparse, Malik and family have done a great job of cleaning, painting and fixing up the space. You can’t miss the old cast-iron storefront at the corner of Preston and Ormsby with its fresh, bright-orange highlights.

Inside, the white tile floor is absolutely sparkling and the walls freshly painted in appealing colors of pale peach over burgundy. Mahogany-look tables and pretty, rose-color side chairs look as if they may have done duty in a more upscale eatery. There’s seating for about 30.

The Pakistani dishes may take a while to come out, as Mrs. Malik prepares some items to your order. While we were waiting for lunch one day, Akbar Malik explained that Pakistani and Indian cuisine are similar because “it used to be the same country.” (It’s actually a bit more complicated … India and Pakistan were united as the British Indian Empire, but when the British left in 1947, they “partitioned” Pakistan and India as separate Muslim and Hindu countries, respectively, a decision that yielded violence, causing hundreds of thousands of deaths and leaving broken relationships that remain on the front pages today.)

Still, Malik was right: The food is similar, and Mrs. Malik’s preparations at Omar have been consistently exceptional and fresh, with complex, clear-cut and aromatic flavors.

We’ve tried a half-dozen of the Pakistani dishes on several visits, and LouisvilleHotBytes.com forum members, who’ve made the place a cult classic in recent weeks, have been uniform in their praise of the rest of the menu.

On our first visit, Malik suggested chicken Handi ($5.99) as a representative Pakistani dish. It consisted of tender, boneless chunks of chicken meat swimming in a pleasantly spicy, pale-orange sauce that gained a bit of additional fire on the back of the palate. It reminded us of a familiar Indian dish, chicken tikka masala, but there was an aromatic complexity in the sauce that I haven’t found at many Indian eateries.

Chicken biryani ($5.99), another dish that’s similar in Pakistan and India, filled an oval plate with a mix of fresh white and turmeric-scented yellow grains of basmati rice baked with chicken bites and wedges of cooked lemon. (You can actually eat the steaming citrus, but it’s a bit tart to Western buds.)

The aforementioned onion bhaji ($1.09) was a pile of crisp-fried onion strands — something akin to “tobacco onions” — that had been dusted in a blend of aromatic Pakistani spices before frying. They were great on their own — and yes, they’d have made a respectable vehicle for ketchup.

A little later, scouts from the Louisville Restaurants Forum reported that Omar had added a few items to the menu, including a mutton curry. That drew me right back. Mutton, mature sheep meat, frightens some people fearful of its “gamey” flavor, but those thousands of fans of western Kentucky barbecue down around Owensboro and Paducah can’t all be wrong.

We reported for duty, and Akbar Malik seemed delighted to see us again. After a warning that the mutton would take about 16 minutes’ cooking time, we placed our order and watched the scene on Shelby Street out the big front windows.

The dish, mutton karahi ($5.99), proved to be goat, not sheep, but it was a happy dining adventure either way. Bite-size chunks of meat, some with small bits of bone still attached, were seared in oil, then long-simmered with tomatoes and Pakistani curry spices. It was four-alarm hot, complex and vibrant, but very different from the more familiar flavors of Indian curry. A generous bowl came with a big plate of basmati rice on the side, and we needed it all to sop up the delicious and fiery flavors.

A pair of Omar’s kabobs ($1.99 each) looked very much like juicy, hand-formed hamburgers but carried a rich, savory flavor that was redolent of salt and onion and just enough spicy heat to get your attention. Tender and juicy, they came with warmed pita halves, chopped iceberg lettuce, tomato and cucumber chunks and a small tub of a pale-green sauce of yogurt, mint and a hit of jalapeño. Assemble it all in a pita half and you’re dining on something not unlike a Pakistani version of the Greek gyros.

This time our meal was served on attractive pale-green dishes rather than Styrofoam. It tasted fine both ways.

No matter how much we eat, it has been almost impossible for us to boost the price of a meal for two at Omar over $15, with fountain drinks; and it is almost impossible to persuade Mr. Malik to accept a tip. His instinctive generosity makes it difficult for him to receive a gratuity. But times are tough in the restaurant business, and he’s taking on a big challenge in a just-gentrifying neighborhood during a recession. It’s worth the effort to slip him a $5 … and suggest he share it with the chef.