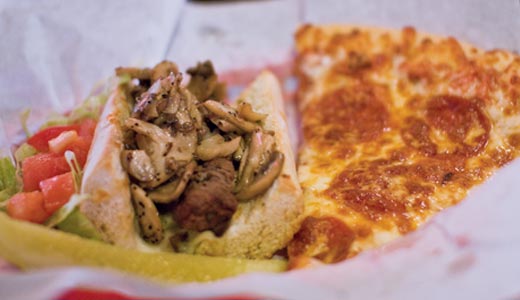 I went into Johnny V’s, a New York-style pizza place in Jeffersontown in the former location of Hero’s, seeking authenticity. New York-style pizza? I’ll expect big, wide, triangular slices of thin-crust pie with minimal sauce and thick, chewy cheese — a slice of pizza that is best folded in half in order to avoid slide-off.

And what did I get? The recognition that sometimes you just need to let good food be good food. Authentic? Let’s call Johnny V’s pizza “authentic Louisville-Italian with a New York flair.” Or something like that. It wasn’t quite what I expected, but that ended up being a good thing.

While watching NCAA tournament hoops at Johnny V’s with my friend Justin, I contemplated the succinct menu, which features pretty much what you would expect: In addition to pizza, you’ll find appetizers like mozzarella sticks ($6) and garlic knots (traditional breadstick twists, $5); three different salads ($3.99-$5.99); sub sandwiches such as “The Vito” meatball sub ($7.50); and even gyros ($7.50). The Brooklyn-style gyro was tempting, featuring Italian sausage links served on a Vito roll (same bread as the meatball sub, presumably) and topped with peppers and onions. But the “spiedie” was the sandwich that caught my eye. More on that in a sec.

But I finally decided on a combo called the S&P 500 — the menu boasts that it’s “only 500 pennies” for a slice of pizza and an aforementioned spiedie. In fact, Johnny V’s calls it “the Original Louisville Spiedie.” Five bucks? I’ll bite.

I dug into my slice of pepperoni pizza and was quite satisfied — the pie at Johnny V’s certainly takes its cue from New York-style thin-crust pizza, although it isn’t quite as New York as, say, Luigi’s. Johnny’s is not as thin, and while it is foldable, folding isn’t a requirement. But it’s worth the price.

Now, about that spiedie: Owner John Salamida is a native of Binghamton, N.Y., and he brought with him to Louisville this regional New York favorite. A spiedie is a sandwich consisting of cubed meat — Johnny V’s offers the choice of beef, pork or chicken — marinated, then grilled on skewers and topped with provolone cheese and sautéed mushrooms.

Meat is the focus here — the bread is used as a sort of oven mitt to grip the meat while the skewer is removed, with the toppings added later. At Johnny V’s, the meat is marinated in an original Salamida Spiedie Sauce, and that adds a tang that makes the flavor, well, unforgettable. There’s a spiedie salad on the menu as well.

I was served a beef spiedie so tender and delicious that I couldn’t stop thinking about it as I watched basketball and sipped cold draft beer. So, before Justin and I left, we ordered another S&P 500 — I ate the spiedie (chicken this time, which wasn’t quite as tasty), and he tackled the pie.

Honestly, the pizza is solid, but it’s the spiedie that will call me back.

I should mention that the atmosphere is quite enjoyable, too, in a sports-bar way — plenty of flat-screen TVs, a full bar and a modern feel set within an older building create a setting that works well with the restaurant’s theme. It’s a nice touch that Peroni, an Italian pilsner, is on tap, along with rotating selections from Cumberland Brews and other staples. Old photos of Salamida’s family help set the scene, and the fact that Johnny spends much of his time working the room only adds to the old-school ambience.

Justin said the garlic knots are especially good, too; unfortunately, after two spiedies and a slice of pizza, I was out of room. But next time? Fugheddaboutit.