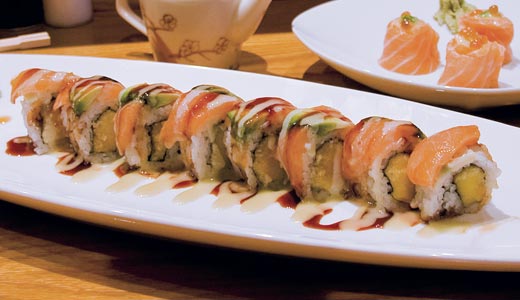 The exterior of the flat-fronted cinderblock building on Preston Highway near Audubon Park that houses Oasis Sushi leaves much to be desired.

The phone number on the awning was written with a Sharpie. And a friend, who turned me on to the place and shall remain nameless, noted that it sort of resembles a massage parlor — one of questionable intent and oft-joyful endings.

But get past that iffy first impression and there’s plenty to like about this hole-in-the-wall sushi and karaoke bar. It may be a hidden treasure in a neighborhood clamoring for some dining diversity.

My friend Greg and I stopped in for what we were told was a worthwhile happy-hour deal and found the place nearly empty. We sat at the L-shaped bar and scoped the mostly bare, burnt-orange walls, three booths, five tables and a couple of empty rooms down a short corridor. There was a couple dining at the other end of the sushi bar, a busy chef and one other employee, but the place was otherwise empty.

Nevertheless, there is a quaintness to the place that seems to still be in development. For instance, soy sauce is dispensed through small, teapot-like containers rather than the standard-issue Kikkoman red- and green-topped bottles, and the soy dishes, rather than the typical bland, white rectangles, were leaf-shaped ceramic vessels that appeared handmade.

We asked the chef about the happy-hour special to which we’d been tipped, and he gave us the lowdown: Drinks and some entrees are half-price from 5:30-6:30 p.m., Monday through Thursday; Monday features half-price drinks all day.

When I asked about sushi specials, he smiled and said, “Some sushi items are half price; that means you order sushi, and I’ll decide what’s half price.” Can’t argue with that. So, Greg and I asked for a couple beers and perused the offerings.

Along with an entrée list and a sushi list, there is a modest wine list, as well as a number of sakes and liquors from which to choose, including Bek Suju, Chum Churum soju and Jinro Chamisu Fresh ($15.95 each, when full price).

The sushi and entrée menus are about what you would expect from a small sushi bar — the standards, mostly within the $4-$8 range, with some special rolls and combo options as well. I noted the nigiri list included “spicy scallop,” which was interesting. But what Greg and I quickly discovered (with the help of the couple sitting near us at the sushi bar) was that the place to look is on the wall.

Greg and I each searched for something appealing there on handwritten flyers, held to the wall by transparent tape. My friend went for the Hawaiian Mango Roll for $9.95, while I chose the Kiss of Fire Roll for $10.95. We also ordered a few items from the main sushi menu, as well as edamame for $3.

We soon learned the empty rooms are private karaoke spaces that parties can rent by the hour. There are two smallish rooms, set up with karaoke gear, benches, tables and TVs, as well as a larger room for big parties outfitted with a big-screen TV. One of our fellow diners was actually talking to the chef about an upcoming party he had arranged. We also learned the chef we were talking with was Song Kim, who owns both Oasis and Bendoya Sushi Bar downtown; Oasis opened near the end of 2008.

Kim was quick with his work, and created a beautiful presentation of the food. Greg’s main choice, a traditional maki sushi roll cut into bite-size pieces, featured fresh mango and crunchy bonito flakes inside, topped with salmon, avocado and a tasty teriyaki sauce. I tried it, and while I’m not a huge mango fan, I was impressed. The natural sweetness of the mango blended well with the other ingredients, particularly the sauce.

“This might be my new favorite sushi roll,” Greg said. The man can be impetuous, but I can’t argue with him on this one.

The Kiss of Fire Roll was right up my alley. I do like the spice, but I don’t necessarily want heat to interfere with flavor. The roll featured delicious spicy tuna with avocado inside and was topped with thin slices of white tuna, slices of fresh jalapeño peppers resting on the fish, each with a single dab of what appeared to be Sriracha chili red sauce. It was gorgeous to behold and even better on the palate — a great balance of spice and flavor, and the light crunch of the jalapeño was a nice touch, too.

The sushi was also quite fresh and chilled. I ordered white tuna, salmon and red snapper sashimi, and received thin but generously proportioned slices, tightly wrapped and presented. Greg ordered white tuna nigiri as well as a volcano roll, piled with what tasted like a mild sauce/dressing with what appeared to be chopped scallop atop a California roll. This roll wasn’t quite up to the distinctive standards set by our other choices, but it was good nevertheless.

A couple other interesting specials I noted included the Preston Roll ($9.95), spicy crab and asparagus, topped with fried fish; and the Super Devil Roll ($10.95), tempura shrimp and bonito, topped with avocado and spicy crab.

Chef Kim also shared with us slices of another special roll, a new experiment of his. This one featured mango and crab inside a cucumber roll — with the “roll” in this case not being nori and rice, but rather the skin or outer layer of a cucumber cut into a rind. The freshness of it and the combination of flavors was quite pleasant and, well, out of the ordinary. (Kim noted he normally inserts avocado instead of mango, but decided to try it that way since he had the extra mango on hand.)

Both dinners came in under $20 — the Kiss of Fire was full price, but the sashimi and beer were all half their regular prices. Let’s hear it for happy hour. I would recommend trying it now before the word gets out; then stick around for the karaoke.