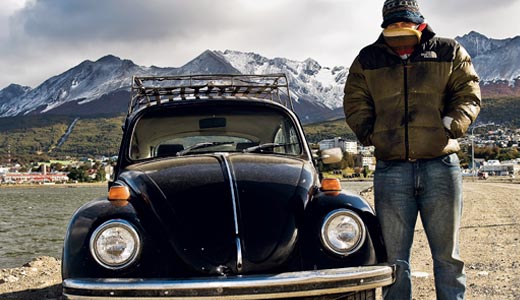 Ross and Jerry saying hi from Ushuaia. "Sorry, it's too cold to wave." Photo by Ross Gordon

I have driven more than 18,000 miles, through 12 countries and two continents to end up as far south as you can on roadways without a snowmobile. I made it to Ushuaia, Argentina — the southernmost city in the world — and what a long, strange trip it’s been.

For those of you who haven’t been following my blog, let me pick up where I left off last month: Peru.

Peru was not at all what I had been expecting. Within an hour of leaving Ecuador, the landscape turned from cold, wet, forest-covered mountains to hot, dry, sandy desert as far as I could see. I skirted the Peruvian coast with the snow-covered Andean peaks of the Cordillera Blanca directly to my left and up almost impassable dirt roads that, at some point, I was sure to cross.

However, the desert was so surreal and unexpected, I found it hard to make that left turn. I finally did, and Jerry — my ’71 VW Beetle, which I’m currently driving around the world — managed the terrain, something I thought could only be done in a Jeep. I did some damage to his belly that I later had to fix in Lima, but the experience was worth it. Coming back down out of the mountains was like what I imagine landing on the surface of the moon to be. The Peruvian desert is a place where the world could have been duped about space travel and landscape, about landing on the moon or Mars, and if I was ever going to see a UFO it almost certainly would have been here.

After the desert it was back into the mountains to get to Machu Picchu. In order to reach this amazing tourist trap, I actually had to drive Jerry at altitudes over 20,000 feet. It was a major letdown. Tourists stood in lines hundreds deep to be shuttled up a hill and back to see this wonder of the world — and this was low season. It was neat, but I would recommend a jaunt down the bourbon trail or a day at the races instead.

It took longer than expected, but Jerry and I made it out of Peru alive and relatively unscathed. Then it was on to Chile. The difference was apparent instantly. The streets were perfectly paved, the hostels felt safe and the cities had more of a Spanish metropolitan vibe. As refreshing as it was, I had no idea Chile — along with Argentina — would prove the most beautiful and challenging part of my entire adventure. Would you believe it took me five days of driving 11 hours a day at 65 miles an hour to reach the Fin Del Mundo from Santiago? Patagonia is beautiful and incomprehensibly vast. No words or photos could adequately describe driving across this expanse. It must be experienced to be fully understood.

At any rate, I am here, and Ushuaia is one of the most beautiful places I have ever seen. Jagged, rocky, glaciated and snow-covered peaks shoot straight up out of the ocean, while rainbows form in the mist over the Beagle Canal. I am going to stay here a while to photograph Gauchos (Patagonian cowboys), as well as some other cultures that exist only in this part of the world. Until then.