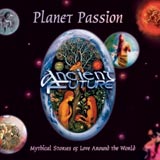 If the members of the United Nations formed a world-fusion band, it might look and sound a little something like Ancient Future’s re-issue of their seventh recording. Featuring instrumentation from Africa, Asia, South America and the Middle East, Planet Passion is a mythical story of love, flirtation, seduction, courtship, marriage and longing. Manose Singh’s bansuri flute and Matthew Montfort’s scalloped fretboard work stand out in this eclectic, visionary global village, where each track features its own unique set of players. At its best, Planet Passion strives to preserve the world’s vast musical heritage via international collaboration: the idea that one protects the old by creating something new. This is at the heart of fusion music and the heart of Ancient Future’s global aesthetics, too: a diverse, unified world without borders, a multicultural community, a new, reconstituted sonic reality.