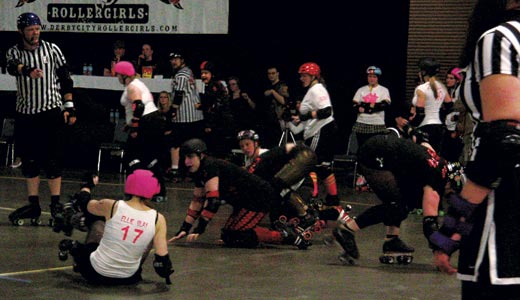 It’s a mild Wednesday evening, and as the sun sets upon this half-full parking lot in Louisville’s South End the women begin to arrive in twos and in threes, carrying their gear into the unassuming entrance of Champ’s Manslick Rollerdrome. At first glance, these women appear to be the very students, teachers, graphic designers, bakers, nurses and mothers that they are in real, everyday life.

Once inside the cavernous, decidedly aged skating rink, however, something else takes hold of them. These students, teachers, graphic designers, bakers, nurses and mothers become something else entirely: Trained athletes. Graceful performers.

Most of the team is stretching at the end of the rink while others skate laps, warming up for the night’s practice, and a handful are still coming in, putting on their gear, chatting. In just three days the Derby City Roller Girls will play the Roller Girls of Central Kentucky, their second game of what has already been a notable season for the team — having recently gained admittance into the Women’s Flat Track Derby Association*, the girls are ready for some action.

I introduce myself to several of the members, and in turn I meet the various members, groupies, refs, team statisticians and other hangers-on whom are the backbone of Louisville’s premier women’s roller derby team. It isn’t long before I’m bestowed my own DCRG handle. Sweet Mama — a tall, dark-haired woman of a somewhat Amazonian stature — christens yr. humble correspondent “Southpaw McGee,” and by this simple yet necessary act of initiation, I am accepted into the fold.

After 15 minutes or so Coach Eeka arrives. She carries a clipboard under her tattooed arm, her steps quick and determined, causing the whistle around her neck to swing from side to side. The team falls into line, stretching down the middle of the rink. The night’s work begins.

Watching (never ogling) them from the sidelines, I strike up a conversation with Sirius Trouble, a petite yet masculine woman who reminds me of a young, handsome, peroxide Mickey Rourke.

“I hate this.” She’s talking about her leg, which is embedded firmly within a white brace. “I’d just really rather be out there, you know?”

I assume she broke it in the line of duty. “No,” she says, gripping a cane with both hands. “It happened at work. Got it caught in the freezer door.”

She hasn’t been on the team for a year and already Sirius has the easy talk and knowledgeable confidence of a veteran, relating to me (with the help of many others) the mechanics of the game, strategies, tactics and plenty of other things I will not appreciate until I see the team in combat this Saturday.

It’s Saturday night. A crowd of at least 500 has gathered in the East Wing of the Kentucky Fair & Expo Center for this very moment. The DCRGs skate onto the concrete track amid roars and cheers, and the pageantry of the event reaches that of spectacle — a little girl even sings “The Star-Spangled Banner.”

Like other natural phenomena that must be seen in order to be fully believed, it’s rather hard to describe roller derby to virgin eyes. The chariot race from “Ben Hur,” minus the Roman trappings and latent homoeroticism, comes to mind. Or the James Caan film “Rollerball,” except instead of the whole futuristic, totalitarian, death-sport aspect, you’ve got sweaty women in fishnets, beer and plenty of loud cock-rock.

The whistle blows and the pivots take off, setting the pace for a first half largely dominated by penalty-laden jammers who spent inordinate amounts of time in the box.

Seven minutes into it and the stage is already set for the rest of the night. The ROCKs — suffering from inexperience and a low roster — manage to score their first point courtesy of Sugar Shock, bringing the score to a lopsided 46-5.

DCRG Captain Carrie A. Glock keeps her pack tight, and with the strength of jammers Sweet Mama, Smokeahontas, Little Bo Teeps, and overall MVP Envy Mi Yoni (whose 18-point jam was the largest of the night), they manage to systematically outrun and outmaneuver their Bluegrass rivals.

With less than 10 minutes left in the first half, and the DCRGs commanding the game with a 50-point lead, ROCK player Speedy Jenkins is knocked out by an errant, unidentified helmet-smack to the face and slowly skates to a collapse at the far end of the rink. The game stops for five minutes before she comes to, with much applause, no worse for the wear. (Later, I am informed by multiple people that this happens about once every other game or so.)

What becomes readily apparent is that DCRG comprises multiple players who are adept at performing multiple roles, and through the sheer quality and quantity of their ranks, they simply overwhelm the ROCKs. Throughout the second half the DCRGs continue this winning streak, never losing their cool, and before all is said and done they manage to score the most points in their league’s history, bringing the final score to 194-32.

ROCK coach The Screamstress says it was more or less a numbers game. “We only have a total of 10 players, and one was out. For two of our girls it was their first bout ever. It’s just less stressful on everybody when you have more players.”

Star DCRG jammer Envy Mi Yoni is in a post-game glow of sweat and adoration (fans are in tow for autographs) when I approach.

“A couple of the ROCK girls were hard hitters,” she says, beaming. “But I have to give it to them: They didn’t give up, they had heart.”

Captain Carrie A. Glock is sanguine: Despite being miffed at the refs for putting her in the penalty box more than she felt she deserved, members of her family are here for the first time. As the crowd begins to pour out into the gathering storm, with many of the players en route to the game’s after party at Monkey Wrench in the Highlands, I ask Coach Eeka for her thoughts on her team’s performance.

“We’ve been doing a lot of work,” she says, clipboard in hand. “I’ve had them running five jams in a row, just to get them used to it. We’ve also got a secret offense that I can’t tell you about right now.”

It is at this moment that Sweet Mama rolls up to us. She drapes her arms over and hugs me like I’m much shorter than I really am.

“What’d you think of that stuff, Southpaw?”

I gulp, think of Robert Crumb, and say it was great stuff.

*WFTDA is to roller derby as PGA is to golf (more or less).

1. Five members of each team are allowed on the track at any given time: three blockers, one pivot and a jammer. Blockers prevent opposing players (jammers) from scoring; pivots set the pace of the action, wear a stripe on their helmets, and no other players (except jammers) are allowed to pass them; finally there’s the jammer, with two large, prominent stars upon the helmet. She is the only player who can actually score points, the process of which shall be discussed in the next item:

2a. Jammers score points by racing against their rival jammers to see who reaches the head of the pack first (consider it the equivalent of rolling dice to determine who goes first in a board game). Once this “lead jammer” has been established, she and her team are on the offensive, and so must concentrate on pushing their jammer through the pack and having her pass as many rival players as possible. For each member of the opposing team she passes, a point is scored. If the lead jammer manages to lap everyone (including the other team’s jammer), then said lead jammer has committed a grand slam, and thus earns an extra point and much applause.

2b. Conversely, the team with the slower jammer is on defense, and must do their best to prevent the rival jammer from breaking through the pack without committing too many penalties. Minor penalties include a “push” with the hands or elbows, and four minors equal one major, which is itself considered any action that results in physical harm to the player. A major penalty results in one minute in The Box.

3. The elements of Item 2 are known as a “jam,” which is basically a euphemism for a play (in basketball), an attack run (in Army), etc. A “jam” can be called off at any moment, and is called off when the lead jammer places her hands (usually with a sense of flair) upon her hips. This allows teams to oscillate from offense to defense in a split second, and so it can be a hard game to follow if you’re not already staring at the girls’ hips all the time.

Next: The Derby City Roller Girls play fellow WFTDA team the Bleeding Heartland Roller Girls at the KFEC Saturday, April 25, at 5:30 p.m. Tickets are $11 ($6 for seniors) and can be purchased in advance via Ticketmaster.