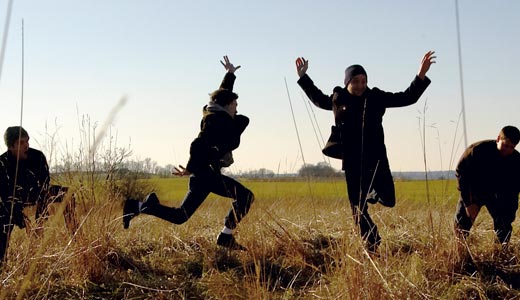 Mock Orange is a band from Evansville, Ind., who, since 1998, have weathered the “revival” of punk, witnessed the wilting of grunge, and will play Louisville on April 17 at Skull Alley.. Take back the CDs your little brother stole 10 years ago and you’ll realize what a decathlon the past decade has to have been for a band. Mock Orange’s perseverance pays off in their tunes — focused, energetic pop gems follow in their footsteps.

Joe Asher, guitarist for the group, talks about the band’s history and what it’s really like to be big in Japan.

LEO: How did Mock Orange get started?
Joe Asher: Mock Orange began a very long time ago. Heath and I were friends from grade school and had been in various high-schoolish bands and Ryan Grisham and Brandon Chappell had the same relationship. We sort of met through a mutual friend and started playing.

I think it started as something we were doing for fun, jamming in the garage … but we were never playing covers really. There was always at least a nugget of artistic endeavor with the band. But I also think there have been three different bands within this one band over the years. We probably should’ve changed our band name several times but we never have. Around the time we were doing “First EP” is when I think this current version of Mock Orange began, and at this point it is most definitely not about parties. It’s all about trying to write songs that we would like to listen to ourselves and songs that we really want to play together.

LEO: You guys have an interesting history having spanned the punk (Blink-182, Jimmy Eat World, etc.) revival and even worked with Mark Trombino. How have you seen the music scene change for you guys in the past few years?
JA: Everyone talks about how the scene is super-saturated with bands, and I think this is true. It makes it more difficult, in a way. It’s also given rise to tons of great music that probably still would’ve existed but I might not have heard about.

Also, 10 years ago when people were still buying CDs and labels were still making money, it was much easier to get a budget from a label, which enabled you to go into the studio with someone like Mark Trombino or J. Robbins or Angus Cooke and make a “studio record.” Now, it seems like labels are still wanting the same commitment from their bands but the budgets are getting smaller and smaller. This is a major reason why, starting with Captain Love, we just started doing our own records and then licensing them out to labels. The production values might have suffered just a tiny bit, but this is what happens when the majority of the money is sucked out of the process. But honestly, I almost feel like it’s a truer way of creating an album. If the band writes, performs and produces an album, you really are getting a product that is from the band itself. There are ups and downs …

I think, as we get older, it is our natural tendency to want to hear more traditional song structures and such. I want stuff that is pleasing to my ear, not always music that might be technically interesting, but perhaps takes some effort to digest. We have made a conscious effort to not throw the kitchen sink into every song and sometimes, when the kitchen sink is in the song we subtract less essential parts to try to make things not be exhausting to listen to.

I don’t really know what it is about the traditional song structure that makes things more pleasing to the ear than avante-type structuring. Obviously anything that works, works.  There are no rules. But my guess is when speaking of music that could loosely be lumped into some type of pop genre, we are just so used to hearing traditional structures that they make the most sense. I don’t really want to have to put a ton of effort into getting into music. I just want it to be good on the first listen if possible. That being said, it is not like we are sitting around with some pre-formed idea that “if we write a song, it must be verse, chorus, verse, chorus, bridge, chorus or nothing at all” … I think it’s just our natural tendency as we get older.

LEO: Mock Orange has been to Japan five times and toured with a really huge Japanese act (The Band Apart). Got any good stories?
JA: I couldn’t pick. They are almost all good. It’s the one thing that has happened to us where I have to say we are undeniably lucky. Almost no one gets in such a great situation.