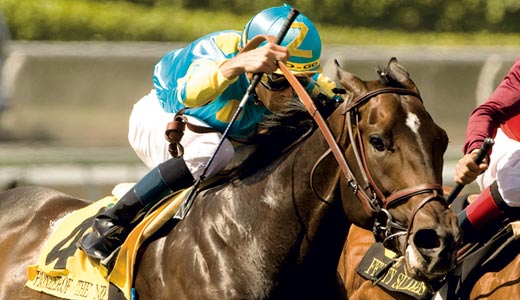 Don’t fool around with the other horses. Find out the number for Pioneerof the Nile and go bet.

There’s no such thing as a sure thing, of course — and especially not in the Kentucky Derby. But don’t tell Pioneerof the Nile. The horse thinks he’s going to win the 135th Run for the Roses. And we agree.

On a sunny Monday morning at Churchill Downs this Derby Week, the big bay pretty much announced he is the horse to beat. Just stepping onto the track he awed onlookers with dapples upon dapples laid along his backside. Then he rolled out a five-furlong work in 1:01, with a second quarter we clocked down the Downs’s homestretch in 23 1/5 seconds. Rider Joe Steiner let the big bay continue at speed into the corner before slowly backing off the gas. The horse was going so good it took Steiner, a former jockey, the entire length of the backstretch to throttle him down. Kind of like throwing a rope around a freight train. There was another Derby horse getting cranked up for a work of his own, and the Big Horse blew right past him. Take note, Pioneer seemed to say: I’m here.

“He’s really matured and he’s done just great since he got here,” says trainer Bob Baffert. “But this is what you want to see. After this work, you know he’s going to show up Saturday.”

Pioneerof the Nile won four straight stakes, including the Santa Anita Derby, but is also seasoned. With the sound racing foundation he got at age 2, Pioneerof the Nile probably has more strong miles behind him than any horse in the race. And the strong work at Churchill might erase any doubt whether the form he earned over synthetic surfaces in California will transfer to traditional dirt at the Downs. Looks like it will.

“He’s got such a long stride,” says Baffert, “I think he moves even better on the dirt. He did this today pretty effortlessly.”

Despite a Hollywood reputation, Baffert is a horse guy who grew up on a ranch. He speaks with admiration for his horse — as a horse.

“He’s got a lot of fight,” Baffert says. “He’s got the heart. He’s got the ability. He’s got the pedigree — you see that [sire] Empire Maker in him that he’ll need for the classic distances in the Triple Crown. About all he doesn’t have is a trainer.”

But Baffert will do. He’ll be gunning for his fourth Derby, while owner Ahmed Zayat and jockey Garrett Gomez seek their first.

One nice feature of this year’s Derby is the depth of class in the field. The race lost a significant competitor Monday, when Florida Derby winner Quality Road was declared out with quarter cracks in two hooves. But all the other major prep race winners are set to go.

Desert Party has emerged as a serious contender since his arrival from Dubai. As noted in this space last week, Desert Party zips over the Downs dirt. He’s light on his feet, with easy speed and natural balance. He should sit just behind the early pace and go to work in the last half mile.

On the other hand, Derby history is littered with lesser-loved stablemates who surprised on Derby Day. Regal Ransom, the other horse off the plane from Dubai, might try to wing it from the start.

It should be noted, however, that front-end types are usually all or nothing in the Derby. Once passed in the stretch, they are likely to be passed by more closers in the final furlong and ultimately finish off the board. This is a betting consideration. You can use Regal Ransom, but the best horses for third and fourth in the trifecta and superfecta are the come-from-behinders.

One might be Hold Me Back, who came from way back to win the Lane’s at Turfway Park, then closed again in the Blue Grass to be second to General Quarters.

A number of other horses will be strongly backed — but not by us.

I Want Revenge won two Derby preps in New York over a traditional dirt track, and might even be the Derby betting favorite after the New York speed figure money rolls in. But the horse looks overrated to us. Hasn’t been sharp at the Downs, but works again on Tuesday.

Friesan Fire won the Louisiana Derby and has trained very well since. Last week he worked a mile in 1:39 3/5, and Monday smoked five furlongs in 57 4/5. Hasn’t raced beyond 1 1/16th miles, however.

Dunkirk is a spectacular question mark. He’s been in just three races — all this spring — and shown flashes of spectacular speed. But he’s by Unbridled’s Song, who is not a sire of stamina.

Papa Clem won the Arkansas Derby nicely, but ran rank in a workout Saturday at the Downs and finished seven furlongs out of gas. The Derby is 10 furlongs.

Meanwhile, it wouldn’t be a Derby if there wasn’t one horse that almost no one saw beforehand, who jumps up at a zillion-to-1 odds to finish third or fourth and help light up the tote board in the Kentucky Derby. It’s a tradition. A likely suspect is Flying Private. But the one we like that we hope nobody else will is Win Willy. There’s no great reason. But he might. Win Willy paid $115.60 when he won the Rebel Stakes.

“If there’s no pace in front of him, then he hasn’t got a shot. But if there is some pace, he could hit the board,” says trainer Mac Robertson. “The farther back the better, and what I’d really like is mud.”

So here are the top four finishers in the 2009 Kentucky Derby: