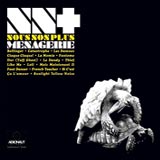 Serge Gainsbourg is the new black. Or so it seems on Nous Non Plus’s album Menagerie. Nous Non Plus (which translates as “Us No More”) is a New York-based group of francophone RISD grads who channel Gainsbourg into a 21st century context. Heavy on the Moogs, strings and indie cred, Nous Non Plus’s sound is whimsical, charming and sung almost entirely in French. It’s a kitschy nook they’ve crafted. Not quite an inside joke, but not far off. Part of the continuing appeal of Gainsbourg is his audacity and the mod-ness of his music. This appeal, however, never translates into Nous Non Plus. Their instrumentation and songwriting don’t allow for tongue-in-cheek music changes, making every song like the next. In this way, the album is less of a menagerie and more of a continual hammering. Irony is as much subtlety as it is wit. Nous Non Plus seem to think irony is a kitsch art project. Pardon us if we don’t get the joke.