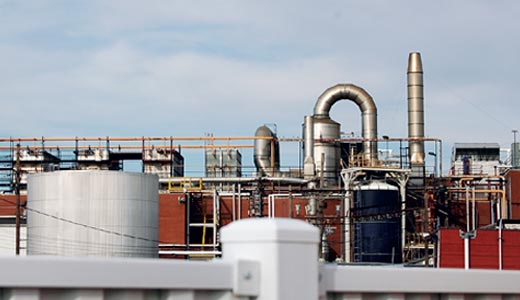 Take a walk down a Butchertown street during any weekday and you’re likely to encounter a strange variety of smells.

There is the faint odor of livestock, which you’ll pick up a handful of blocks from the Swift & Co. meatpacking plant, an institution on Story Avenue in east downtown since 1968.

As you approach, you may detect the unmistakable odor of burning hair and/or flesh, mixing with a more direct fetor of herded animals and their shit. You may smell chlorine, bleach or some kind of sharp chemical agent. If your palate is refined, you will pick up the diesel fuel emissions from refrigeration trucks idling nearby.

Stand just downwind from the plant, which fills five-plus acres of prime real estate, and the whole mix will hit you like a jackboot to the chin.

“This is about a six, maybe seven,” says Andy Cornelius, president of the Butchertown Neighborhood Association. A Michigan transplant, Cornelius is young with a practical style, wearing a light rain jacket and brown loafers on an overcast day when rain spits in spurts.

Cornelius and Jon Salomon, a young attorney who moved to Butchertown from New York City a year ago, have banded together in an effort to rejuvenate the citizen response to Swift odor — once a coordinated effort that has diminished over the past year.

Meanwhile, the Air Pollution Control District, the city’s regulatory agency, is stepping up efforts to spray the proverbial Febreze around Swift, with new air monitoring intended to catch offensive smells after the closing bell sounds on the workday.

We are walking down Story Avenue when I smell bacon — straight, salty pig — and my stomach grinds a little. We turn left onto Bickel Avenue and bend around to Mellwood, peeking into the entrance where the trucks unload the swine. We approach a truck idling on the street. The pigs squeal, jamming their snouts toward the air holes in the side of the trailer. They are packed so tightly that their feces squeezes out through the gaps. It’s a farm scene.

Just over the six-foot fence that marks an easterly boundary along Bickel, you can see scaffolding on some of Swift’s stacks. Last November, APCD slapped the company with $48,000 in fines — the majority of which are for permit violations, not odor — and an order to update some of its most dated equipment, including adding scrubbers to help reduce emissions odors. The company has estimated the updates will cost $250,000. According to Lauren Anderson, APCD’s director, the agency expects Swift to be able to prove it’s made significant changes within the next six months.

Rare is the citizen or city official who is ambivalent about Swift, which was acquired by JBS, the largest beef company in Brazil and a major U.S. manufacturer, in 2007. The city would rather not drive away the 1,000-plus local jobs Swift provides. But most Butchertown residents are loathe to offer the company the slightest praise, bemoaning instead the stench that has stigmatized the area.

Over the last six months, APCD recorded 98 different complaints about offensive odors coming from Swift, according to records obtained by LEO Weekly through the open records act. Some simply said it stunk outside their houses. One said a woman had become physically ill due to the rancid smell. Several others complained of a “nauseating” smell.

According to Anderson, major odor issues are usually the result of some malfunction or unusual event. And while APCD issues fines for odor — usually $250 or $500 a pop — such transgressions do not carry much weight.

“Odor is not a high-ticket penalty because it’s basically a nuisance standard,” she says.

In other words, it is subjective.

When APCD receives a complaint about odor, a compliance officer goes to the scene and assesses the smell, usually within 15 minutes, according to Anderson. The officer tries to assess the strength of the smell and how far it extends relative to the plant and, of course, the complainant.

A major problem with APCD’s system, Cornelius and others say, is that compliance officers are generally not available after 5 p.m., even though Swift is still casting odors.

In response, Anderson says, APCD has started an after-hours monitoring program. Twice a week, an officer uses a Nasal Ranger field olfactometer to measure how diluted the odor is at a particular place, usually in the evening or early night. As well, APCD officers are in Butchertown twice a day assessing odors, whether a complaint is filed or not.

Residents are hopeful that with new leadership in the neighborhood and a more responsive APCD, odor conditions might improve.

Mac and Catherine Willett bought and renovated an old firehouse across from St. Joseph in 2003. They moved to Butchertown in 2005.

“We were well aware of the Swift issue, knew there was going to be a long-running issue, and we’re glad to see that finally we think we’re really making some headway on it,” Mac Willett says. “I feel like it’s the first time in our four years down here that I feel like we’re really getting organized as a community.”

Under the leadership of former neighborhood association president Jim Segrest, the group filed a lawsuit against Swift and the city, arguing that disruption from Swift’s big rigs in the little neighborhood was too much to bear. The suit remains stalled.

A spokesman for Mayor Abramson said his office has continued to search for a new location for Swift; however, no one is speculating much about the chances.

It is safe to say, however, that pretty much everyone realizes the modern absurdity that is a major meat-producing operation in the heart of a city. The question that remains is what to do about it.