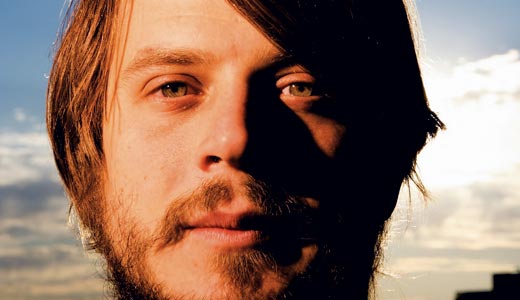 The Marco Benevento Trio makes its first Louisville appearance on Tuesday at the Hideaway Saloon. Benevento is no stranger to Louisville, having performed here before as half of the Benevento-Russo Duo. In that format, he concentrated on organ; with the trio, including bassist Reed Mathis and drummer Simon Lott, he will focus on piano.

This is not your standard piano trio.

On Me, Not Me, released under his own Royal Potato Family label, Benevento uses the piano as a foundation for sounds that include tack piano, clavinet, layers of sounds and the use of loops. It opens with a distorted, grunge version of My Morning Jacket’s “Golden” and covers artists as diverse as Leonard Cohen and Deerhoof. This trio is more along the lines of the Bad Plus or E.S.T. than, say, Keith Jarrett or McCoy Tyner, although they do play it fairly straight on Beck’s “Sing It Again” and the beautiful closer, George Harrison’s “Run of the Mill.” With both jazz and jamband roots, Benevento is open to tapers, as long as he gets a copy.

LEO: How much of the tour will be based on the new CD?
Marco Benevento: This is a CD-release tour, so about 80 percent will be from the new disc, with some material from my last CD, [2008’s] Invisible Baby.

LEO: In addition to the music from these CDs, are you writing new material?
MB: I’ve been writing a lot of dance-rock, using hypnotic loops, toys and sound effects, with a more upbeat sound. Reed made me aware that the songs I write are easy to learn. We can dance, we can hum the melody; you can have all this fun, crazy stuff going over it as well, with the effects and loops.

LEO: Will you be sticking with just the piano this tour?
MB: While I was writing the songs for the album, I was using the computer a lot. I would add distortion, tremolo, layers of Mellotron. I want all this fun stuff on tour with me, with all the moody color and reverb. I decided to stick guitar pickups in the piano and then run those into a tube amp and use the amp for the effects and sounds. I like those extra things, and I want to be able to pull them off. I would hate to put out a record with all this and then tour with just a scaled-down version. So I have added lots of layers and put them on loops, which we will be using for a fuller sound.
LEO: How does the use of loops affect your improvising with the trio in concert?
MB: The loops sort of fill up the whole room, but then we can fade the loops out and stretch things and get into a groove.