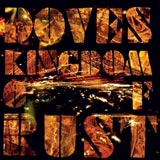 Considering that Doves are masters of moody, mid-tempo Brit-rock, it’s hard to believe they were once an acid house band trafficking under the moniker Sub Sub. But traces of their former lives are sprinkled throughout their catalog, including this one. “Jetstream” pulses along on a tik-tik-tik rhythm that adds driving urgency to the tune, while “Compulsion” features a heavy bass line under a sparse arrangement. There’s even a hint of country in the jaunty title tune, but longtime Doves fans need not worry — the disc contains plenty of soaring choruses and flanged guitars (“Winter Hill”). In other words, no major surprises here, but there’s nothing wrong with that. An air of resignation permeates the material, which some listeners may find depressing, or even boring, but there’s something about Kingdom of Rust that should appeal to teenage misanthropes (and former teenage misanthropes) everywhere.