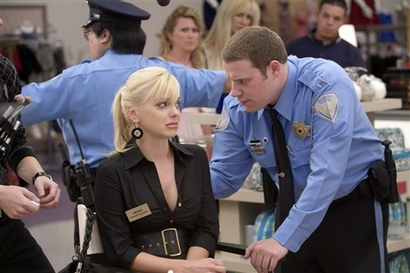 Ignore the comparisons to the pedestrian “Paul Blart: Mall Cop” and go see the funniest, most original comedy to come out this year. Think Wes Anderson meets Martin Scorsese circa “Taxi Driver” with a healthy dose of expletives, and you might be somewhere in the ball park of director Jody Hill’s sophomore effort “Observe and Report.”

The film follows head of mall security Ronnie Barnhardt as he attempts to catch the pervert who has been flashing customers in the mall parking lot. He also wants to win the favor of Brandi (Anna Farris) in cosmetics, the most “beautiful girl in this mall or maybe the whole world,” as Ronnie puts it. Barnhardt is the kind of character Hill showed a fondness for in his first film, “The Foot Fist Way,” and his television show “Eastbound and Down,” a bi-polar with an extremely warped ego. The film works as a comedy, a rather twisted character study and meditation on American mythos gone awry.

As Barnhardt, Seth Rogen shows his range as an actor, playing the role with a madness he has yet to display in any of his other films. There is one scene already garnering controversy, where Ronnie’s ego takes him a little too far, perhaps past the realm of dark comedy. But I will leave that to the viewer to decide and resist the urge to spoil anything here.

The back-and-forth banter between Detective Harrison (Ray Liotta), the cop assigned to track down the flasher, and Ronnie builds up to a ridiculous showdown that must be seen to be believed, another great scene I won’t ruin.

If you like your humor dark and your violence graphic, then this is a highly recommended piece of cinema. If you are easily offended or overly squeamish, this might be one to skip.