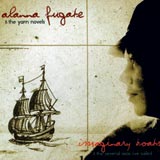 Alanna Fugate’s new release, Imaginary Boats, harkens to an earlier folk tradition that many modern balladeers have forgotten, that of Joan Baez and early Dylan. A Virginia native living in Louisville, Fugate seems to have stepped right out of Greenwich Village circa 1965. With guitar picking reminiscent of Joni Mitchell and a gravelly Joplin-esque voice, Fugate rattles off unexpected rhymes naturally and gracefully. While the songs might get repetitive to some, I found the consistency refreshing and at times revealing. The album flows well, fluidly in fact. The playing also needs not be neglected. The accompanying instrumentation by Fugate’s backing group, The Yarn Novels, is subtle and well orchestrated, nothing to distract us from Fugate’s lyrics and vocals, a wise decision in production. Overall, I would call Imaginary Boats an above-par release.