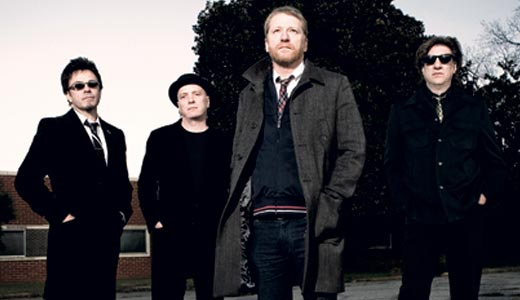 •WEDNESDAY, APRIL 29
Girls, Guns and Glory
w/ Crystal Thomas
Gerstle’s
3801 Frankfort Ave.
742-8616
www.gerstles.com
9 p.m.
Bostonian roots rockers Girls Guns & Glory haven’t ventured much outside New England, but still, their résumé is worth mentioning: opening slots for Silversun Pickups, Clap Your Hands Say Yeah, Bloc Party and Snowden, among others. Their album, Pretty Little Wrecking Ball, earned an award for Best Local Band in the 2007 Boston Phoenix Readers’ Poll, and they were recognized for one of the top 15 albums of that year by The Boston Globe. Nashville singer-songwriter Crystal Thomas opens.

•THURSDAY, APRIL 30
Russian Circles
w/ Lichens, Sweet Cobra, Mountain Asleep
Skull Alley
1017 E. Broadway
749-9541
www.skullalley.net
$10; 7 p.m.
Chicago instrumental sorcerers Russian Circles have made Louisville a regular stop when trekking around stateside, and fellow hometowners Sweet Cobra are part of the Hawthorne Street Records family, which released Workers’ Beasts EP in 2007. Lichens is the performance moniker for Robert Lowe, bassist and singer for 90 Day Men. Lowe’s 2005 album, The Psychic Nature of Being, was recorded in one take as an improvisation. One wonders what he’ll do for an encore.

•SATURDAY, MAY 2
23rd Annual Burger Bash
w/ Lamont Gillispie & 100 Proof
Varanese
2106 Frankfort Ave.
899-9904
www.varanese.com
Free; 11 p.m.
On Derby night back in 1986, Billy Rapaport, an Emmy-winning producer for NBC, the Super Bowl and the Summer Olympics, started cooking burgers for his media friends at the now-defunct Zena’s blues club. Word got around, and one year Bo Derek showed up. Blues magicians Lamont Gillispie & 100 Proof perform, and there will be drink specials and additional late-night menu items.

Six White Horses
w/ Phantom Family Halo & Metal Bubbles
Lisa’s Oak St. Lounge
1004 E. Oak St.
myspace.com/germantownlive
$2; 10 p.m.
Come on: After a day at the track, you’re not too drunk to rock. Louisville Is For Lovers/Ziggy Stardust vets Six White Horses join psych monsters Phantom Family Halo and Metal Bubbles at Lisa’s Oak St. Lounge for post-race shenanigans. At the end of the night, you’re guaranteed to forget about all the money you lost, or probably spend all the money you won on delicious PBR.

Cracker
Phoenix Hill Tavern
644 Baxter Ave.
589-4957
www.phoenixhill.com
$15; 10 p.m.
Seventeen years and a couple lineup changes haven’t slowed down the ’90s survival act. They’re touring in support of their forthcoming studio effort, Sunrise in The Land of Milk and Honey (due out May 5), but not clutching irrelevance. “It was like starting a band and committing to a rehearsal time,” David Lowery says in the band’s bio. “We weren’t kicking back on an island in the Caribbean, waiting for the muse to hit us. We got down to work, found the punk and glam rock in our blood and woke up to Sunrise in The Land of Milk And Honey.”

The Confessional
w/ OK Zombie
Derby City Espresso
331 E. Market St.
442-0523
Free; 9 p.m.
So Jyn Yates told me way back when that The Confessional were putting out a record, but since then, I’ve heard nothing. Jyn, where is it?! Also on the bill is Nick Peay’s project OK Zombie.