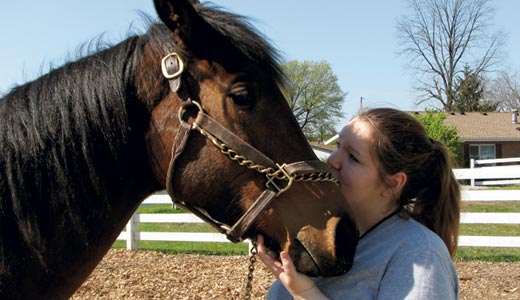 Ellin Ortwein’s childhood was hectic. Before she turned 16, the Boone County native lost her older brother and sister to homicide, was selling prescription pills and had parents addicted to crack cocaine.

“For 16 years I had nobody telling me what to do and ran wild. I didn’t have any rules. I sold drugs and lived on the streets — did horrible things, really,” she says. “I would go out whenever I wanted. My day would start at 9 o’clock at night and not end until 6 o’clock in the morning.”

Before long Ortwein was in state custody. Over the next year she lived in eight different placement facilities; most were on 24-hour lockdown. The last landed her in Louisville.

With her 18th birthday approaching, Ortwein faced a decision: Age out of foster care or recommit to the state until the age of 21.

“I recommitted because they pay for college, and I wanted something in Louisville because it’s close to where I live,” she says. It was then she found Boys’ Haven and its unique equine program, which takes wayward adolescents and teaches them skills in Kentucky’s booming horse industry.

Annually celebrated during the Kentucky Derby, the horsing business is a lucrative one in the state, and has become a new option for adolescents wandering through the state’s foster care system.

Created in May 2007, the equine program’s 30 students are provided with a four-level course load in both equine therapy and employment training. Each day they wake up around 5 a.m. and work with 18 horses that have been donated to the program — by the Kentucky Humane Society, veterinarians and owners.

“We tried to get some horses whose futures weren’t very bright, like a lot of our kids,” says Jay Wilkinson, a retired Louisville police officer and horse trainer, who manages the program. “We bring them in and put them to use.”

Founded by Father James C. Maloney in the 1940s, Boys’ Haven provides a continuum of programs for as many as 300 at-risk youth at a time, including mentoring, counseling and independent-living services.

Staff emphasizes connecting those who are aging out of the state foster care system — about 700 each year — to local employers. “It provides them with a laboratory of learning work-related social skills and technical skills,” says Vernon Rickert, the agency’s executive director. “For a population that’s likely to not be successful in life, it’s a very valuable program in that these kids are able to get a license and go to work in the horse industry.”

Since its creation the equine program has licensed 27 students with the Kentucky Racing Commission, which gives them a leg up at any racetrack in the country. In Kentucky, the horsing business is a $4 billion agricultural industry that employs somewhere between 80,000 and 100,000 people. About 70 percent of the program’s graduates obtain jobs in the equine industry.

Oreece Chestnut, 18, graduated from the equine program last year and immediately landed a job at Keeneland hot-walking horses. He left Lexington a few months later to care for his ailing grandmother and works full-time at Churchill Downs, grooming horses at Trackside Training Center.

“[The program] taught me a lot about how to work with my peers, co-workers. I used to hate the Derby and horses,” he says. “I was scared of horses. But once I got to working with them and learning about them, it made me, how should I say, love the horses and any and everything about them.”

Rickert says having a nationally recognized program with stories like Chestnut’s gives some much-needed visibility to a nonprofit that struggles annually to maintain adequate funding. This year Boys’ Haven was forced to cut 7 percent of its budget after state funding dropped significantly.

The cuts have curtailed important services and forced him to lay off key staff and leave positions vacant.

“We know most philanthropic dollars do not go to social services like this, definitely not to the poor, underprivileged and underserved,” he says. “But we take a lot of pride in our work. These are kind of the throwaway youth in our society that people discard. We really are trying to salvage as many as we can.”

By mid-morning most of the work at the Boys’ Haven stable is complete. Leading them by their leashes, the students circle the horses around the interior barns. It’s a much-needed hot-walking after a good training day.

Former jockey Roger Delk works for the children’s home as an exercise rider and instructs the students on proper equine care. “They can work any racetrack in America,” he says.