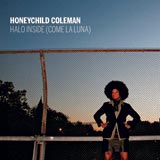 Louisville native Honeychild Coleman has been an enigma since she made her move to NYC, confounding critics who tried to place her music into the neat little boxes we so desire. On this long-awaited full-length (after a decade of EPs and guest-appearances), Coleman is still not making it easy for us. Ranging from middle-of-the-road alternative (“Friend,” aching for film placement) to the hip-hop influenced “Headlock” to Massive Attack-y ambience like the title cut and opening track “Callus,” the album’s cohesion is not thematic or musical, but the gumbo of her adopted Brooklyn. This isn’t exactly club music, nor is it a headphone masterpiece, though I’m still caught up in the album’s strongest points. Fans of Georgia Anne Muldrow, Res, Bjork and the like would be well served by checking this one out. Writer and musician Greg Tate described her best as “Miriam Makeba meeting Bjork in the Sex Pistols’ basement.” I find myself wishing Louisville had a subway so I could ride to this on some odd Friday at 3 a.m., the setting where I imagine much of this album was conceived.