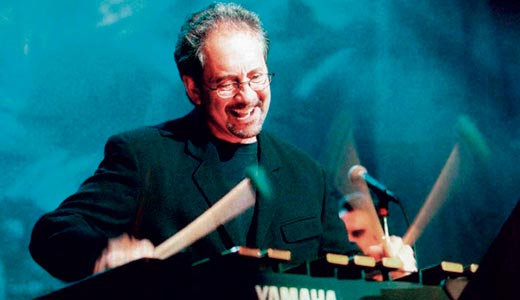 When vibraphonist and marimba player Dave Samuels comes to town for the Latin Jazz Fest at the University of Louisville, he will reunite with his old friend Dick Sisto for two nights at the Seelbach. The U of L concert on Friday will feature Samuels’s arrangements from his 2008 Grammy-nominated CD Caribbean Jazz Project: Afro Bop Alliance. Joining the two mallet artists at the Seelbach will be bassist Tyrone Wheeler and drummer Jonathon Higgins.

Samuels has played with Sisto at the Seelbach on several occasions over the years. In the past, their repertoire has ranged from jazz standards such as Dizzy Gillespie’s “Night In Tunisia” and Herbie Hancock’s “Cantaloupe Island” to American Songbook and pop material including “Darn that Dream” and Leon Russell’s “This Masquerade.” The combination of two vibraphone/marimba players is fairly rare in the world of jazz. However, Sisto and Samuels work well together, not merely comping for one another, but soloing together.
Sisto is enthused about reuniting with his friend and colleague, and LEO caught up with Sisto for an e-mail interview tracing his friendship and work with Samuels.

LEO: How did you and Dave meet?
Dick Sisto: Dave and I met at the Stan Kenton Summer Jazz Workshop, which was one of the first “jazz camps.” I had received a scholarship, having won the “best soloist” at the high school state jazz-band competition. I was playing vibes, and Dave was in the same group playing drums. He mentioned to me years later that I probably helped influence him to switch over to vibes, which he did while still in high school. We are Chicago-born-and-raised musicians. We both began listening live to the greats at an early age.

LEO: Do you have memories of “sitting at the feet of the masters” together at clubs or concerts, etc.?
DS: In those days, jazz clubs seated minors in the “peanut gallery” with a Shirley Temple. On Sunday afternoons at the Blue Note, we heard Count Basie and Duke Ellington. Other spots like the Sutherland Lounge, The London House and The Plugged Nickel featured Miles Davis, Horace Silver, Gene Ammons and Sonny Stitt, and the trios of Oscar Peterson, Ahmad Jamal, Bill Evans and many more.

LEO: Did you keep up over the years with one another after you first met?
DS: After having met that one time at the summer jazz camp, we didn’t run into each other until years later, at which time Dave reminded me of our meeting at the Kenton clinic. Vibes players, especially back then, were few and far between, and it was easy for us to develop the relationship we have today. We have played together as a duo at the universities of Iowa, Purdue, Indiana, Cincinnati and Kentucky. Dave has been featured at the Seelbach in the past and each time brought a great audience response for his prodigious talent. We will be playing vibraphone duo selections as well as other combinations.