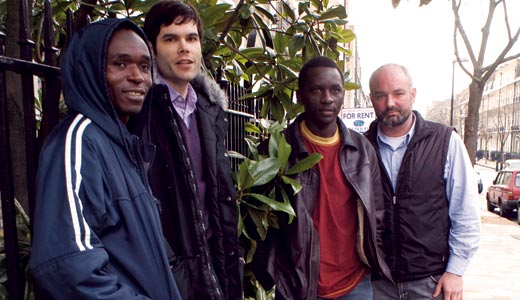 WFPK’s first Waterfront Wednesday of the year gets a world-class start from familiar faces.

The indie rock world has taken a serious gander at rich international sounds as of late, and Extra Golden is a noteworthy addition. However, while Vampire Weekend’s African flourishes originate from their record collections, Extra Golden’s cross-Atlantic sounds come from actually picking up two Kenyan nationals to play with.

Extra Golden formed and survived through a myriad of unusual and incredible situations. Chicagoan Ian Eagleson was in Kenya at various stretches for his doctoral thesis and met Otieno Jagwasi through his work. His friend Alex Minoff, then of the band Weird War, stopped by Nairobi to visit in 2004. “Ian and I have been playing music together for a long time, and we both loved African guitar playing,” Minoff says. “[Otieno] was there, and he started giving us some ideas, and we took some of his songs and changed them into ours. It worked out well.”

The creative burst of these sessions provoked Jagwasi to call session drummer Onyango Wuod Omari to cut a few tracks. The result became their debut Ok-Oyot System, which was recorded almost entirely in a single afternoon. “We didn’t set out to make a band, we just wanted to see what it would sound like,” he says. After running into Thrill Jockey’s Bettina Richards, it wasn’t too long before the experiment piqued enough interest to give the album wider distribution.

An invitation to play the Chicago World Music Festival in 2006 had them reconsider. “It was funny, because we never intended to make a record, then we did it. We never intended to release this record, but we did it. When we were putting it out, we thought, OK cool, we’re just putting out this document of what we did, but never thought we were going to be a band or anything.” Roping in the original Kenyan session drummer, Minoff and Eagleson took this opportunity to give Extra Golden another go.

Of course, there were some hang-ups getting Omari and new member Opiyo Bilongo into the country. Navigating the lengthy visa process became futile with time running out before the festival.

“And that’s when I called Obama’s office in Chicago,” Minoff says. “[Obama’s] father is from Kenya, from right around the same area the guys in the band are from. It seemed like a good fit. His office helped us out a lot.” Concerning whether Barack digs on the music, Minoff admits, “As far as him being a fan of our band, I don’t know. He was just doing his job helping us, but I haven’t gotten any fan mail from him just yet.”

With the encouragement of Thrill Jockey and an overwhelmingly positive response to the group’s live show, Extra Golden came back to stay. Their latest, Thank You Very Quickly, was born after a lengthy tour last summer that included stops at the Pitchfork and Roskilde festivals, as well as our own Forecastle Festival.

“We wanted to use that opportunity to make another recording. The record reflects the fact that we played a lot together, instead of the first record where we never played together. Musically, the Kenyan and American sides are more streamlined and now more its own thing, instead of us putting together these different elements.”

For those who were unable to attend last year’s performance, Extra Golden amalgamates American pop rock sensibilities with Benga — the most popular form of organic Kenyan dance music. The juxtaposition is unnoticeable, as Extra Golden craftily molds a bouncy, breezy, freewheeling form of sunshine pop, informed equally by world, dance and indie standards.

If the weather cooperates, Extra Golden will provide the perfect soundtrack for a brilliant spring evening — and at the perfect price (free). Todd Snider and Tony Furtado are also on the evening’s lineup.