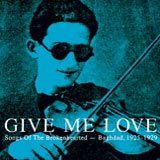 Honest Jon’s compilation of 1920s Iraqi recordings, Give Me Love: Songs of the Brokenhearted, is truly a gem, but it’s not for everyone. It certainly isn’t the type of “world music” employed for NPR bumper music or in the living rooms of people who like to feel “cultured.” Pulled from EMI’s oldest archives, Give Me Love documents very otherworldly dance and, for lack of a better word, Middle Eastern blues music. It may also be one of the few peeks into the music of the Cradle of Civilization before outside influences usurped the cultural movement and the (mostly) Jewish musicians living in Baghdad fled town. Give Me Love offers 22 ornate songs re-mastered from some of the earliest 78s ever pressed, all of which feature ardent vocal performances over violin, hand percussion, an occasional lute and not much else. The music relies on raw, impassioned performances that, at times, resemble West Coast folk and free jazz — some 40 years before said movements took off. Anyone interested in a truly powerful listening experience will appreciate the gifts Give Me Love offers.