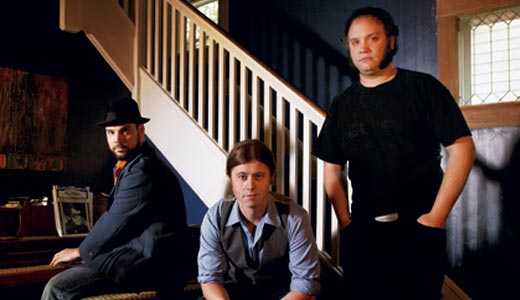 Backyard Tire Fire returned to the studio in February to record their follow-up to last year’s critically acclaimed The Places We Live, their fourth studio album.

After witnessing the band’s live show, Steve Berlin of Los Lobos approached them, asking if he could produce their upcoming release.

Los Lobos have been one of his key influences. The band went into the studio in February to begin recording with Jeff Stuart Saltzman (Death Cab for Cutie, The Decemberists, Stephen Malkmus) engineering. The new record is being mixed in Portland, Ore., right now.

“Steve is a fantastic producer,” Anderson said. “Before, it felt like it was all on my shoulders. I’ve put complete trust in him and Saltzman. I’m letting those guys do their job.”

Last year’s release gained the band spots on several “Best of 2008” lists. Paste and No Depression fell for Anderson’s songwriting, reminiscent of Dylan or early Elvis Costello if either sang about factory work and the rural Midwest. BTF are essentially a workingman’s indie band.

The backing instrumentation of Matt, Ed’s brother, on bass, and Tim Kramp on drums conjures early Tom Petty & the Heartbreakers: solid but not opulent, simple, steady beats and graceful accompaniment to Anderson’s vocals and lyrics. Anderson himself cites Petty, Neil Young and The Beatles as major influences, right alongside Lobos.

“Los Lobos are kind of eclectic,” he says. “That was one of the main lessons I learned from them, to throw a lot of different stuff in the mix.”

A native of the Chicago suburbs, Anderson weaves tales that could have come out of a Carson McCullers short story: Allusions to tractors, cornfields and train tracks are abundant and effective. Anderson’s also not afraid of the tried and true verse-chorus-verse structure, writing intelligent songs that you can sing in the shower, a hard trick to pull off.

“My objective in the songwriting process is to be honest,” he says. “I want folks to feel like the tune was written for them, and identify with what the song is about.”

The band resides in Bloomington, Ill., although they have had several home bases, starting off in Asheville, N.C., then Athens, Ga., for a short stint. Tire Fire played more than 200 dates last year, sharing bills with Los Lobos, Jason Isbell, Clutch, Lynyrd Skynyrd and William Elliot Whitmore, among others. As a result, their fan base grew exponentially, resulting in sold-out headline dates across the Midwest.