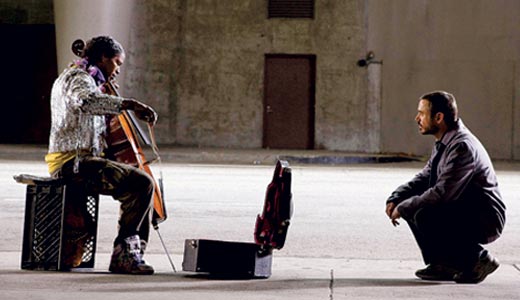 This film’s trailer made it look like one of the many Hallmark-esque, life-affirming pieces of mediocrity that causes me to appreciate Sam Peckinpah exponentially. However, “The Soloist” is anything but. It is a story of mental illness, broken dreams and utter failure. If you are looking for the feel-good hit of the season, this is not the movie for you.

The film follows Los Angeles Times columnist Steve Lopez (Robert Downey Jr.) and his friendship with Nathaniel Ayers (Jamie Foxx), a homeless man of immense talent suffering from paranoid schizophrenia, a man who went from Julliard to skid row. Lopez, in the film and real life, wrote a series of columns about Ayers, writings that he later turned into a book on which the movie is based.

I was pleasantly surprised at the grimness of the film. Apparently Hollywood still has some honest scribes penning scripts. There is no uplifting, redemptive ending, and there are no easy outs. If you seek escapism, look elsewhere. I despise films that patronize the audience. And while I expected “The Soloist” to do just that, the film succeeds in being compassionate without catering to cliché.

One downside is the unbalanced amount of time the two main characters get in development. Too much of the movie is spent on Lopez and not enough on Ayers. Foxx is a superb actor when he wants to be (see “Ray” and “Jarhead” for confirmation). He pulls no punches in his portrayal of the sick Ayers. He will probably receive an Oscar nod for his performance, deservedly so.

The depictions of urban blight and the squalor of skid row are overwhelmingly realistic; the extras playing Ayers’s fellow street people are actual street people, lending an authenticity to the setting. The film’s depiction of homelessness is powerful and never gives way to sensationalism, a mistake consistently made when dealing with this subject matter.

Few filmmakers give an honest portrayal of mental illness. Hollywood tends to either glamorize or condescend. Director Joe Wright has brought us a film that does neither. It is a gritty, realistic portrayal of a man struggling with forces unseen, with a condition he didn’t ask for and that few understand. Lopez’s frustrations — after countless attempts to save his new friend from his demons — will hit close to home with anyone who has had a loved one with mental illness.

“The Soloist” is essentially a tragedy — a straightforward tale of a brilliant cellist blocked by brain chemistry from realizing his dreams. He has a gift he cannot share because of something that is completely out of his control. It’s not fair, but neither is life. And that is the strength of the film — its brutal, unflinching honesty.