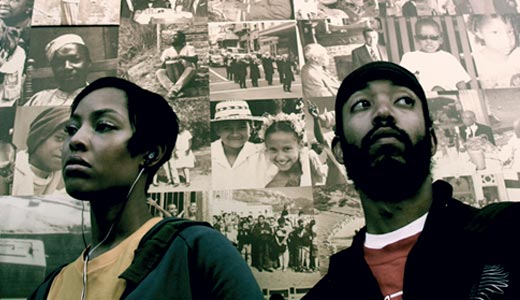 What aims to be the African-American answer to the seminal “The Whole Shootin’ Match,” a film that inspired Robert Redford’s founding of the Sundance Film Festival, quickly gives way to cliché. The plots of the two films are basically the same, except in “Shootin’ Match,” we are dealing with two young, impoverished hillbillies floundering through the years of their prime, and finally facing their disenfranchisement.

“Medicine for Melancholy” is the story of two African-American 20-somethings being forced to deal with issues of class, identity and the evolving pressure of being a minority in modern San Francisco, a rapidly gentrifying metropolis with the smallest proportional black population of any American city. It is equally a romance about bikes and one-night stands, a sort of San Francisco love song.

There are far too many silent, drudging scenes in which the characters are being introspective. The opening is effective: Micah (Wyatt Cenac) brushes his teeth with his fingers in a bathroom filled with empty beer cans. The woman he has shared the night with, Jo (Tracey Heggins), does the same, pausing in disgust at the party house’s squalor. The repetition of such segments is irksome.

Despite my complaints, there is some merit to the film. The music, which includes tracks by Tom Waits and White Denim, is outstanding, as are the performances and cinematography. Watching the depths of degeneracy that the characters reach is also entertaining at times; Micah, after sharing a cab with Jo, uses money from the wallet she accidentally left in the floorboard to pay the driver. Another positive: director Barry Jenkins’s choice to shoot in black and white. It adds an element of desperation and loneliness that the film would’ve lacked were it in color.

As a character study, “Medicine” succeeds on many planes. We get to see the awkwardness of being in one’s 20s, exemplified especially by Micah and Jo’s failed attempts at intimacy. The scene where Micah tries to serenade Jo on the acoustic guitar is so embarrassing I cringed. The funny thing is, it works, at least momentarily.

The title is somewhat misleading. This is not a depressing piece. It has moments of candid humor and hope. The characters stumble through their lives, searching aimlessly for grace and meaning. Watching them do this is endearing at times. However, my main problem is with the writing, which if it were stronger, would take the film to another level.

I found myself wishing there was more. At an hour and 27 minutes, the film leaves much to be desired. It seems to stop rather than end. I wanted to know what becomes of Micah and Jo — whether they are doomed to flounder forever or will someday self-actualize and perhaps find true love. At the film’s finale, you have no idea if their wandering days are over.