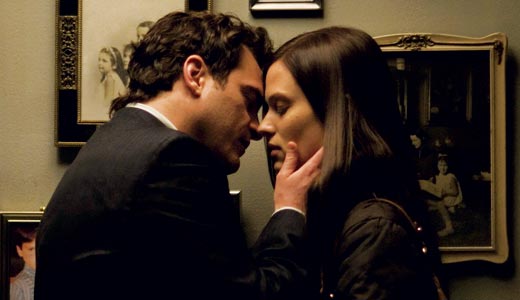 Back in college, my girlfriends and I chanted this obnoxious toast before every round of drinks:

Looking back on it, I not only realize that we used the improper pronoun (swap “who” for “that”), but also that it’s relatively the truth when it comes to the mad, mad world of dating and falling in love and all the messy stuff that comes with it. My little drinking toast sums up the premise of “Two Lovers,” which is now known as Joaquin Phoenix’s last feature film before A) his public meltdown or B) his publicity stunt/punk on the American public (did you see his appearance on Letterman?).

Who hasn’t found themselves in this dagger-through-the-heart scenario? You like Girl A. Scratch that — you love Girl A. She is your soul mate, you know it so deep down it hurts. You can picture your future with Girl A — babies, puppies, long walks on the beach, matching Snuggies. You will go vegetarian for Girl A. But, alas, Girl A doesn’t return your affections. And then there’s Girl B. Girl B is cute, nice and someone you can bring home to Mom and Dad. She brings you lunch at the office and is there to satisfy your every need, including picking up a six-pack before the big game. Girl B is available, but she is not Girl A. Never will be. So what do you do? Cast aside Girl B and hope that Girl A comes around (“If she really knew me, she’d like me”)? Or settle for Girl B and always wonder … what if?

In the case of James Gray’s “Two Lovers,” our troubled, dark and disturbed protagonist Leonard (Phoenix) has it bad for Michelle (Gwyneth Paltrow). A fellow neighbor in his parents’ apartment building in Brooklyn, which is where Leonard now resides after a devastating breakup, Michelle buddies up with Leonard — takes him dancing with her and her girlfriends, instigates window-to-window flirting, makes him come to dinner with her and her married boyfriend to see how close he is to leaving his wife. It’s the typical I’ve-got-this-boy-on-a-short-leash type of behavior most of us are guilty of. She even says the dreaded four words no man wants to hear, after Leonard professes his love to her: “You’re like my brother.” Ouch.

But then Lenny’s got Girl B, the cute and charming Sandra (Vinessa Shaw). The daughter of his father’s business partner, Sandra is immediately drawn to the brooding Leonard. Most of the time she wins his attention — you can tell Michelle is never far from Leonard’s mind, even when they’re in the throes of passion.

As Michelle becomes more distant, Leonard wrestles with the age-old dilemma: fight or settle. Phoenix does an amazing job expressing his character’s subdued emotions when you can tell this man is about to explode just under the surface. Michelle is so close and so perfect, why can’t she see how good they would be together? Or, why don’t I have the same intensity toward Sandra? We’ve all been here and managed to survive when the outcome doesn’t go our way. “Two Lovers” adds nothing new to this scenario other than more heartbreak — so here’s to fucking us!