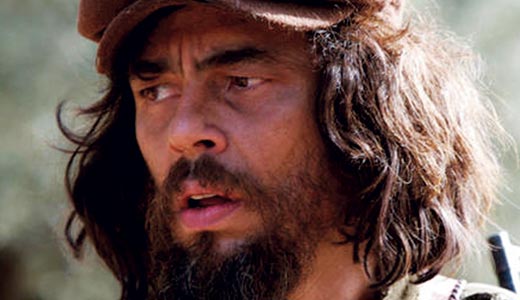 In larger markets, “Che” was screened as a single, exhausting epic. Thankfully, in burgs like Louisville, it’s been divided into two films that more or less stand on their own.

“Part Two” follows Che soon after his failed attempt to overthrow America’s psychopathic Congolese allies. He moves on to Bolivia, a remote Andean country that, like much of South America, is torn by class strife between a small urban elite and a huge, ethnically diverse underclass. Che adopts the same approach here as he did during his earlier guerrilla wars: take to the mountains, befriend an alienated local population and train for a bloody war.

But the Bolivian campaign was, in military parlance, FUBAR. The Bolivian communist factions were reluctant to embrace violence. Weapons and men were slow in coming. And the CIA trained government forces in counterinsurgency tactics.

This part of Che’s life is rich in historical and psychological meaning, which Soderbergh bafflingly ignores. Declassified documents (available through the National Security Archives and other places) show the depth of American involvement in Bolivia, as we attached a Green Beret team and a CIA operative (posing as a local soldier) to stop Che. Had he succeeded in his uprising, Bolivia had all the markings of another Vietnam. For many reasons it didn’t.

Although Soderbergh would disagree, the most interesting issue with Che is not why he did what he did; like millions of other men in the 1960s, he was a true believer in Marxism, deeply sympathetic to the poor and justifiably outraged by American imperialism in all its forms.

No, the real issue is why he failed. And that is a question that goes well beyond the CIA and Special Forces and touches on Bolivian sociology and the limits of Marxist doctrine. Sadly, these are questions only briefly discussed.

Instead, much of the film is lingering shots of Che encounters with jungle, high desert and achingly beautiful hamlets. There are some stunning, memorable scenes of Bolivia’s natural wonders, but I found myself growing tired of them and even a little embarrassed. This exuberant celebration of wild Bolivia would surely be alien to somebody from the region, where jungle and desert mean struggle and poverty. “Che” is obviously by gringos, for gringos.

There are other obvious flaws. Benicio Del Toro — whose job it is to be a suffering icon, not a three-dimensional character — comes across flat. And the last hour of the film is shot after shot of Che and his ragtag band being ambushed or sniped, and then running off into the jungle, carrying wounded or hobbling on gangrenous legs. It’s a punishing, arduous film, obsessed with the suffering that Che endured, idealizing his virility and perseverance. The movie could easily have been called “The Passion of the Che.”

Obviously, Soderbergh wanted to create a revolution with this epic retelling of the Che story. Unfortunately, he parallels his protagonist’s life — “Che” is a failed revolution.