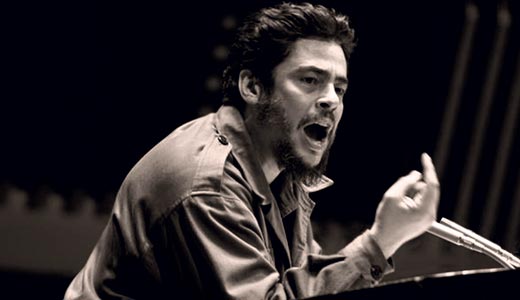 Everything you need to know about jungle and guerrilla warfare can be found within the reels of the first part of Steven Soderbergh’s biopic “Che: Part One.” Doctor, writer, Marxist and revolutionary, Ernesto Che Guevara rose to prominence as a leader of Fidel Castro’s radical “26th of July Movement,” the left-wing political party that invaded Cuba and tried to overthrow the U.S.-backed dictator Fulgencio Baptista. The party won the battle after a copious amount of bloodshed, which the film depicts with stark realism. This historical revolt is the focal point of the first part of director Soderbergh’s immaculately crafted film.

The film shifts from monochrome to Technicolor, Che’s 1964 U.N. delegation in black and white and the wartime scenes in color. Soderbergh serves up fireworks in “Part One,” restraining from delving too deeply into the dense political background that would bore most audiences. He gives us just enough politics, philosophy and Marxist platitudes. While the action is ample, it is not Tarantino-cool. There are no clever quotes or slow-mo montages. A hand-held camera is used to accentuate the aforementioned realism. Characters he spends time developing are killed at random in battle sequences, an effective tactic in giving one a sense of the arbitrary nature of wartime violence. Women are raped and deserters of the movement pillage villages. It is not a becoming portrait of war, neither is it a denouncement. It is perhaps one of the most honest portrayals I have seen.

While most of the film probes the nature of war and revolution, it is not recommended to those who are unfamiliar with the history — without proper context, there is little heart. That’s my one complaint, that Soderbergh did not make a more accessible piece of cinema. Of course, it is also part of the film’s charm — that everything isn’t spelled out for us. He treats the audience like thinking, well-read adults, and he deserves kudos for that. Fortunately, I read up before going to the theater. I recommend the same to those dead set on seeing “Che.”

Benicio Del Toro is quite simply stunning as Guevara. The fact that he is fluent in Spanish serves him well, since most of the film features subtitles. He delivers a brooding yet subtle performance as the famed revolutionary. It is his best performance since Soderbergh’s kaleidoscopic drug epic “Traffic,” in which the actor also spoke Spanish.

While the film won’t appeal to wider audiences because of its overall length and unconventional narrative and cinematography, it is still something to behold if you have the time and interest, especially in the man and the history. I am suiting up to see the second part posthaste.