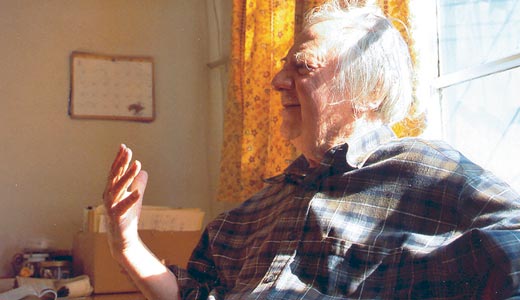 In mid-December, Speaker of the House Nancy Pelosi received a memorandum from a constituent on Caselli Street in San Francisco. President-Elect Obama had been ginning up support for the stimulus package he would submit to Capitol Hill immediately after his inauguration, and the constituent, 91-year-old Archie Green, had a bit of historical perspective to share with Madame Speaker. He reminded Pelosi that during the New Deal there weren’t just roads paved and bridges built; federal agencies stimulated all manner of American ingenuity and creativity, and reflected the best parts of the country back to itself.

“The Federal Writers Project,” Green wrote, “included a folk unit that both preserved and presented workers’ culture” through photography, recordings, film, and journalism. He advocated the establishment of a similar unit to document the occupational experience of the current stimulus projects.

Green, who died last week, was a shipwright, union activist, labor historian, folklorist, record collector, professor, author, wholly unreconstructed progressive, and the progenitor of the theory and expert of the practice of “laborlore.” Defined as the expressive culture — song, story, slang, and technical know-how — of workers, laborlore blew open the hermetically sealed pantheon of generalized American “folk” archetypes: the Yankee, the Negro, the Indian, the hillbilly, the lumberjack, the cowboy — all of which had long prevailed in both popular and academic consciousnesses. Green insisted on a deeper understanding of American diversity, reflected by occupational involvement, and to be seen where any two bodies gather to work a job together, swapping stories, jokes and expertise. These are the potential ingredients of class solidarity and union brotherhood, to be sure, but also, and more essentially, a proud, conscious and engaged citizenry.

Longshoremen, pile-drivers, coal miners, gandy dancers, catskinners, steel workers, millwrights — Green saw their expressive traditions as aesthetically worthy, intellectually rich and politically viable. His first book, 1971’s “Only A Miner,” was a study of recorded coal-mining songs, many drawn from Eastern Kentucky’s Sarah Ogan Gunning, Aunt Molly Jackson and George Davis (“The Singing Miner of Hazard”). Songs created by miners and their wives/sisters/daughters were not mere accessories to the struggles of life in the coalfields but fundamental documents of them, and giving them space in the public realm through publications, festivals, concerts, and exhibitions — summed up as “public folklore” — was not romantic fetish or ideological showboating but a service to democracy.

(Green didn’t take kindly to the romanticizers, especially as expressed by the likes of Woody Guthrie or Pete Seeger, whom he described and dismissed as “Stalinism plus pablum.”)

He was no pretender. Weaned on his father’s immigrant Jewish socialism and his after-school engagements with the Workmen’s Circle, Green joined Roosevelt’s Civilian Conservation Corps before paying his first union dues to the United Brotherhood of Carpenters and Joiners of America on the San Francisco waterfront in 1941. “I know what it’s like to have wanted to be a worker,” he recalled in 2007. “It was a state of exultation.”

In our supposed post-industrial age, such reveries may themselves ring sentimental or romantic. But Green never succumbed to the smug, insulated comfort of the academy, despite his professorships at the universities of Illinois, Texas and Louisville (a Bingham Humanities fellowship brought him here in 1977). Foundations and fellowships were only different avenues for his agitation; although he was a self-described left-libertarian and anarcho-syndicalist, he used his affiliations to agitate enthusiastically and effectively. Apart from his union, of which he was a member for 67 years, he was a senior associate at the AFL-CIO Labor Studies Center; a founding member of the Fund for Folk Culture; and he has been credited for lobbying Congress for the passage of the American Folklife Preservation Act. Unanimously approved and signed by President Ford in 1976, the bill created the American Folklife Center at the Library of Congress; Librarian of Congress James Billington in turn presented Green with a Living Legend Award in 2007.

“Exulted” is among the last adjectives most Americans would choose to describe their metaphysical state of employment — unless, in the current climate, exultation is the state of being employed at all. Indeed, as America has endeavored to shed its blue collars and clip its dirty fingernails, trading the pension of the skilled journeyman for the retention bonus of the well-connected MBA (and losing both in the process), exultation has become a privilege reserved for those who succeed in avoiding work rather than those who specialize in it. But now that our wide, frantic eyes are adjusting to the tripartite darkness of recession, crumbling infrastructure and snake-oil finance, perhaps labor might regain some of its attraction. Perhaps we’ll remake the country in the spirit of cooperative toil and communal gain, revealing new dimensions of Americanness. Perhaps a new generation of laborlorists, assisted by the public trust, will take down the songs and stories of new folk heroes for the ages.

But it will take ingenuity, creativity and leadership. Archie Green didn’t live to hear how Nancy Pelosi responded. As of press time, she hadn’t.