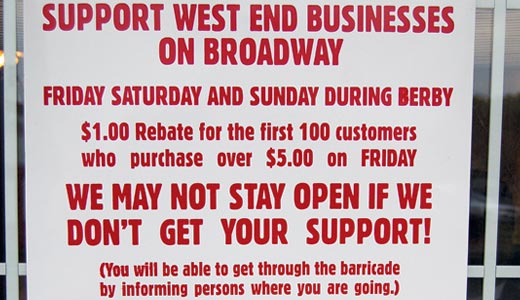 An enormous white tent covers the parking lot at St. Augustine Catholic Church on West Broadway, where in just a few hours, a crowd of more than 1,500 guests are expected to gather.

Dubbed “Slice of Louisville,” this casual yet extravagant party is held every year on the Saturday before Derby, and it’s the only official Kentucky Derby Festival event in west Louisville. Now in its seventh year, the soiree will offer an impressive array of fare, including exotic crab dishes, Russian caviar and French wine.

“We thought there should be an opportunity to throw an event to welcome Derby in the West End and raise dollars we could turn around and give away to various charities,” says Hosea Mitchell, chief organizer of the event.

But before 2005, Slice of Louisville was largely unheard of, eclipsed by the overwhelming popularity of Broadway cruising, an unofficial Derby happening that flooded west Louisville with custom cars and foot traffic.

Metro Police began strictly enforcing the city’s cruising ordinance, which prohibits drivers from impeding traffic. Police blocked cross streets along West Broadway, closed parks and required residents to show city-issued passes to get to and from home during Derby weekend.

The mayor’s decision effectively eliminated the pimped-out cars that once blanketed west Louisville, ending the unofficial Derby festivity of cruising. It also turned the West End into a ghost town at Derbytime, emptying a main thoroughfare of consumers during a weeklong celebration designed to crowd the city with people and flood it with revenue.

This year, Metro Police are easing back on some restrictions — keeping West End parks open and eliminating the need for residents to show passes to access certain streets — while standing firm that cruising will not be permitted. As a result of the previous crackdown, many believe Derby weekend in west Louisville will return to its pre-cruising years of modest traffic, which might allow residents, businesses and promoters to highlight alternative activities.

Cruising had an unrivaled simplicity and spontaneity, and some question whether replacing it with contrived events will satisfy a community thirsty to participate in the city’s annual brouhaha on its own terms.

“It was pretty much organic, you had a few incidents here and there, but we would come down and have a nice time, nothing more than what you would see on Bardstown Road,” says hip-hop recording artist D. Mawl, also a local promoter. “It was a time people were going down, dwelling, mixing and mingling on the streets.”

For the upcoming Derby weekend, Mawl has been promoting the Celebrity Soul Welcome Soiree, a red carpet event featuring a celebrity guest list. Along with the Funkmaster Flex Custom Car and Bike Show, it has been promoted to the same urban audience that once celebrated along West Broadway.

The elimination of cruising was disappointing, but Mawl says it opened new opportunities for young urban promoters.

“You basically subtracted that organic atmosphere from our culture — now what else can we do? Therefore you have a lot of young entrepreneurs who will throw events to attract those same type of people,” he says. “You don’t got to cruise on Broadway no more. You can look forward to more for you and your tailored audience.”

Mawl says the first-generation cruisers who began the tradition have changed and are ready to move forward with new events.

“People will always be up on Broadway, but after the last five years or so, when the police started cracking down, it got to a point where nobody really wanted to go hang out down there anymore,” he says. “So it’s not even on the map anymore in terms of what we’re doing for the Derby.”

Before the cruising enforcement, online message boards trumpeted West Broadway as a mecca for car aficionados and hip-hop fans on Derby weekend. There remains a committed contingency that will cruise no matter the level of deterrence, but police efforts have significantly muted the local mood and particularly the national broadcast, which many west Louisville leaders say wasn’t intended in the first place.

“This was something thrust upon the area. No one saw this coming,” says Donna McDonald, president of the West Louisville Business Association. “For the couple of years the police did not do anything you had total gridlock, which put public safety at risk.”

Last week, the organization, which represents 75 businesses in west Louisville, held a meeting with Metro Police to inform residents and businesses about the department’s traffic strategy for Derby weekend. McDonald says they were pleased when police officials said overbearing restrictions — such as passes for residents — would be lifted. She says police have eradicated the suffocating traffic and driven away most out-of-town cruisers.

During its height cruising reportedly brought in hundreds of thousands of people who were, among other things, willing to spend money. But west Louisville lacked the business infrastructure to handle such a high volume of people and resulting bumper-to-bumper traffic, both of which aggravated residents.

Its economic impact split businesses down the middle, McDonald says, with some vendors thriving, while others had no customers and were forced to close down the entire weekend.

“I think everyone has learned,” she says. “The police department, residents, churches and businesses — we’ve all learned. It’s all about give and take.”