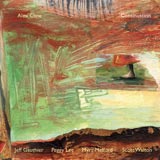 Twins, they are. Nels now enjoys crossover attention for Wilco, and that’s probably the rationale for the simultaneous release stunt. But the brothers Cline have been part of an experimental music scene for decades, and little of either’s new all-instrumental disc resembles Tweedy. Alex weaves sections of post-bop jazz, some modern classical snippets and percussive textural waves. It can take a while to get used to these disparate elements fit into mini-suites, but patience gets surprising rewards. “On the Bones of the Homegoing Thunder,” one of Continuation’s most complex pieces, was inspired by Thomas Merton. Nels’s disc, practically a Gordian knot of dense overdubbed plucked strings and twisty noises, has its own epic structural gem of a tribute in “Rod Poole’s Gradual Ascent to Heaven.”