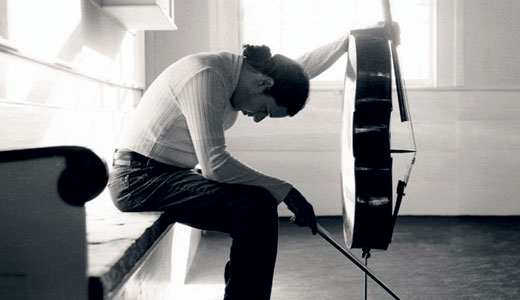 Matt Haimovitz brings his cello to town this week for concerts in two of the most different venues around.

On Thursday, Haimovitz will play the Elgar Cello Concerto in two concerts with the Louisville Orchestra in elegant Whitney Hall. On Saturday, he will appear alone on the intimate stage at the Rudyard Kipling.

“The concerts will be very different,” says Haimovitz. “For one thing, I won’t be doing any talking at the symphony hall. But at the Rud, I’ll be engaging the audience all through the show.”

Which might be necessary — to explain what’s going on.

The Elgar is self-explanatory: a wonderful romantic concerto now firmly ensconced (and we’ll find out more about that later) in the classical repertoire.

But the music Haimovitz, 39, will offer at the Rudyard Kipling is far from ensconced in any repertoire. “I can almost guarantee,” promises the performer, “most people will have never heard the cello sound like this.”

As not many had heard the cello sound last fall, when Haimovitz dropped into Le Poisson Rouge in Greenwich Village to perform with DJ Olive. New York Times music writer Steve Smith described the scene, amid the low murmur of café voices and the tinkle of ice:

In the midst of a sparkling classical career, and a teaching job as professor of music at McGill University in Montreal, Haimovitz seems determined to kick music up a notch. He associates onstage with known rock musicians and recently commissioned a work he will record with a Canadian DJ — or electronic artist, as they seem to be called these days.

But there won’t be any “fuzz and crackle” or “throbbing pulsations” Saturday night at the Rud. No DJs. Just Haimovitz and his 300-year-old Matteo Gofriller cello.

The cellist says he’s counting on the acoustics at the Louisville club to heighten the audience’s experience with his music and commentary.

“I visited the Rudyard Kipling a couple years ago, when I was on my ‘Anthem Tour,’ celebrating living American composers,” recalls Haimovitz. “In fact, this time around, it’s a sequel to that tour, including Canadian composers. I’m calling it ‘Figment.’ But I guess it’s really ‘Anthem II.’ My personal ‘Rambo’ series.

“The whole project is inspired by composer Elliott Carter, who turned 100 years old this year and is still composing,” says Haimovitz. “He wrote two ‘Figments’ for solo cello. The idea of the ‘Figments’ is finding short pieces, or simple building blocks that create a whole new musical form.”

Haimovitz says the goal of the “Figments” tour is to champion new music, and he makes a comparison with modern art. “Music always lags behind the art world. People flock to exhibitions and pay millions of dollars for the latest abstract art piece. But with music it’s is sort of like, ‘Oh, that’s incomprehensible.’ But music and art are both interpreting our time in the same way.”

While all that sounds interesting, one might find the back-story for the concerts with the Louisville Orchestra even more compelling.

The story begins with Edward Elgar, a turn-of-the-20th-century English composer who wrote the “Cello Concerto” in E Minor, Op. 85., late in his life. But the piece was hooted by critics at it premiere.

“Beatrice Harrison, a wonderful cellist in England, then delivered a performance with Elgar himself, conducting that caught the attention of the musical world,” says Haimovitz. “But when it really took off was when Jacqueline du Pre started playing it everywhere. She made it her own, and that’s when the piece became part of the canon cello concerti.”

Ms. du Pre, of course, was the beautiful and tragic cello virtuoso of the late 20th century whose life was cut short by multiple sclerosis at the age of 45. She was only 28 when she made her last performance, her fingers having lost their sensitivity to the strings. Many of her performances were with husband Daniel Barenboim conducting or playing accompanying piano.

Meanwhile, Haimovitz, born in Israel in 1970 and raised in California, was a budding cello virtuoso, playing Carnegie Hall at age 13 and touring abroad at 15. His very favorite record, he says, was du Pre’s recording of the Elgar concerto with conductor Sir John Barbirolli and the London Symphony — the disc that put Elgar’s concerto on the musical map.

“On my first tour in Europe, I played the Elgar concerto with Daniel Barenboim conducting,” says Haimovitz. “It was his first concert with a cellist since playing with her. Afterwards, Barenboim took me to visit Jacqueline in her apartment. In the last several years of her life, I was very close with her, and every time I was in London she would come to my concerts. I would visit her in her home, and we would watch her videos and listen to her recordings. She was one of my idols.”