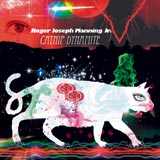 Roger Joseph Manning Jr. has earned accolades for his work with Beck, the Moog Cookbook and others, but to many listeners, he’ll always be best known as one of the two masterminds behind Jellyfish, the late, lamented aggregate many saw as power-pop’s great white hope in the early ’90s. Since Jellyfish’s breakup, Manning has kept busy as a journeyman keyboardist, recently beginning a belated solo career from which Catnip Dynamite is the latest offering. Manning’s virtuosic compositional gifts are as sharp as ever, recalling Brian Wilson, XTC and Todd Rundgren throughout. Highlights include the 10cc-ish shuffle “Down in Front” and “Love’s Never Half as Good,” which recalls the Jellyfish standard “Calling Sarah.” The masterpiece is “Survival Machine,” a lugubrious epic that somehow evokes both Sparks and early Genesis. Lushly produced and melodically impeccable, Catnip is exactly that for Manning and Jellyfish fans.